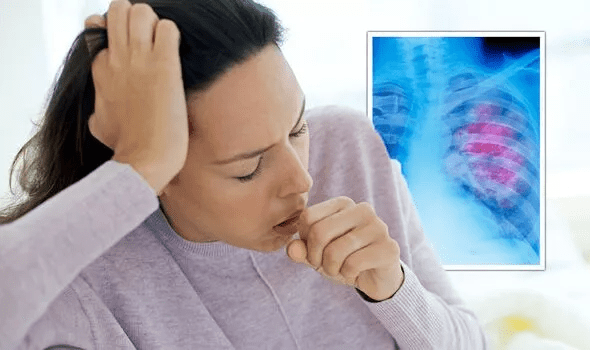 Abnormal cells within the lungs form into a cancerous tumour, which can lead to outward symptoms.

People may not recognise they are indeed suffering from lung cancer as the symptoms can cross over with other conditions. Take coughing, for example, which can be the result of a cold, the flu, or asthma. Coughing could also be a sign of lung cancer, but only if it checks off specific criteria.

According to the NHS, a lingering cough – one that does not go away after three weeks – should be checked out by a doctor, as it could point towards lung cancer.

“There are usually no signs or symptoms of lung cancer in the early stages,” the health body cautions.

Yet, if you have a long-standing cough that “gets worse”, that too could be a sign of the potentially fatal disease.

If there is any blood when you cough, this too should be reported to your healthcare provider as soon as possible.

Another possible indication of lung cancer is if there is an ache or pain when you cough.

Other symptoms of lung cancer can include recurrent chest infections, persistent breathlessness, tiredness, loss of appetite, or unexplained weight loss.

One less common sign of lung cancer is “finger clubbing”, which is when there is a change in the appearance of your fingers, such as becoming curved, or the fingertips becoming larger.

Lung cancer may also lead to:

“See a GP if you have any of the main symptoms of lung cancer or any of the less common symptoms,” the NHS advises.

If a tumour is diagnosed, Cancer Research UK says “survival depends on many factors, including the stage and type of lung cancer”.

The type of lung cancer a person has depends on the type of cell that the cancer started in.

Two main groups of primary lung cancer (meaning the tumour began in the lung) are:

How man beat pregnant wife to death over N2.7m loan