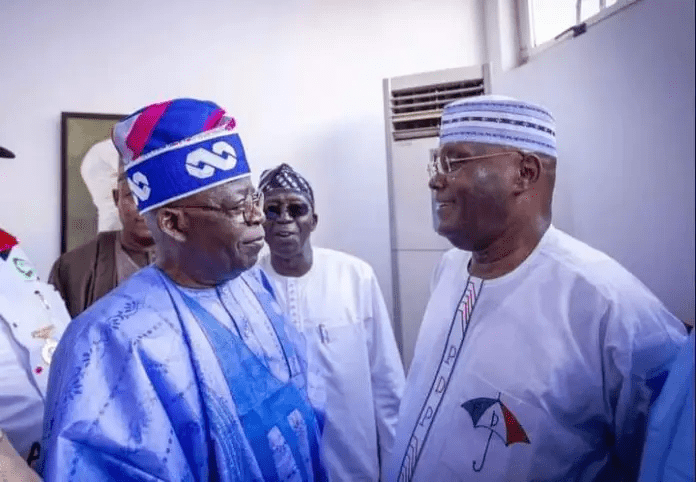 Tinubu told Atiku that mudslinging and character assassination won’t stop his inevitable victory in 2023, adding that the eventual defeat of the former vice president in the 2023 presidential election is certain.

Phrank Shaibu, a special assistant to Atiku Abubakar special, had earlier on Sunday challenged Tinubu to reveal his identity, his background, early education, and parentage.

But Tinubu in a statement issued on Sunday, December 18, 2022, by Bayo Onanuga, the Director of Media and Publicity of the APC Presidential Campaign Council, said the loss awaiting the PDP presidential candidate in 2023, led to a resort to shadowboxing.

The statement read: “We were not surprised that the desperate Atiku camp, faced with mounting setbacks in its campaign, will engage in another round of mudslinging after it failed to make any capital over its amplified allegation of drug dealing against our candidate.

“This latest allegation, we must say is another attempt at shadowboxing.

“Having failed to pull the wool over the eyes of Nigerians on its 16 years of infamous, criminal sabotage of our fatherland, in which Atiku as the overseer of the privatisation of our national assets programme , shortchanged our people, the PDP has just woken up to the reality that Asiwaju Bola Ahmed Tinubu’s sure victory in the presidential election of 25 February 2023 is inevitable.

“Hence this desperate resort to character assassination and innuendoes.

“If only the PDP would go back to its records, it would have realised that the same campaign of reckless calumny was its stock in trade in the governorship campaigns in Lagos State in 2003. It had also been the subject of an investigation by the Lagos State House of Assembly.

“In the 2003 election, the masses in Lagos punished the PDP for its malicious campaign and rejected the party massively at the polling booths.”

The Tinubu campaign stated that Atiku is faced with defeat in 2023 which informed his decision to revive a dead allegation.

“It is unfortunate that the party and its presidential candidate, Atiku Abubakar have chosen to revive a dead allegation, knowing that this election is again slipping away.

“Atiku, who once confessed he was the mastermind of the electoral assault by the PDP against the Alliance for Democracy in the 2003 elections in the South-West, is shamelessly back at his game, showing no contrition that the courts overturned the rigged victories.

“We however sympathise with Atiku and his mudslinging agents. We know why they are lashing on every straw available. They are seized with fear that the election is once again lost.

“With the massive turnout of the Nigerian people to welcome our candidate, Asiwaju Bola Ahmed Tinubu in Kaduna, Minna, Abuja and other parts of Nigeria in the last week, it is obvious that they are running after a train that has left the station.”

Tinubu stated that Nigeria’s Constitution is clear on the eligibility for the President.

He said he had satisfied all the requirements.

According to him, “The Constitution of the Republic is very clear on the rights of a citizen to contest for president. Our candidate has fulfilled those conditions. The Independent National Electoral Commission (INEC), the impartial umpire has affirmed that he is qualified to run.

“But the PDP and Atiku are utterly confused and in serious disarray and running round in circles like a barber’s chair looking for what is not lost.

“A responsible party should have taken the cue from its losses. In the last two weeks, no fewer than six cases filed by proxies of the PDP on these same frivolous allegations have been thrown out by the courts.

“Yet like a fly that insists on being buried with the corpse, the media handlers of the PDP prefer to flog a dead horse.

“The over 93 million registered voters who will vote in the 2023 elections have the intellect to choose who they want as president. That man is Asiwaju Bola Ahmed Tinubu. Yes, that is his name.

“PDP should wait for its day of Judgment rather than engage in this obscurantist, diversionary game, a game that will be determined by the Nigerian masses.

“We shall surely meet this party of looters at the polls next February.”