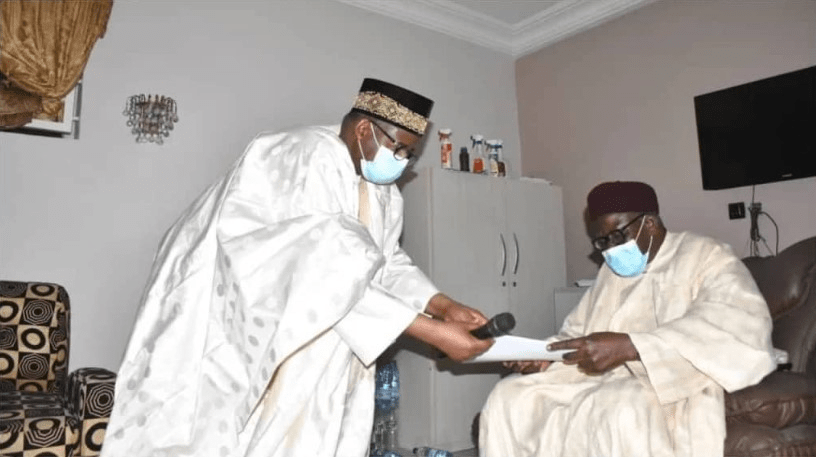 The Bauchi Emirate Council has stripped a former Minister of Special Duties, Bello Kirfi, of his traditional title of “Wazirin Bauchi” and removed him from being a Council Member for the second time in five years.

The new development was said to be unconnected to the ex-minister’s alleged “disloyalty and disrespect” to the State Governor, Bala Mohammed.

Kirfi, a retired federal civil servant, was a Minister in the government of Alhaji Shehu Shagari in the 1980s, and also the Pro-Chancellor, University of Ilorin from 1997-99.

He also became Minister of Special Duties during the administration of President Olusegun Obasanjo in the 2000s.

The Octogenarian’s removal was conveyed in a letter addressed to him by the Secretary of the Bauchi Emirate Council, Alh. Shehu Mudi Muhammad.

It was dated January 3rd, 2023 with reference No: BEC/ADM/20/VOL.XV and titled: “Removal from office as a Council Member and Traditional Title of Wazirin Bauchi.”

Muhammad stated in his letter that the Ministry for Local Government and Chieftaincy Affairs in the state informed the Emirate Council of Kirfi’s “disloyalty and disrespectful” to the governor, hence his removal from office.

He said: “I am directed to refer to a letter received from the Ministry of Local Government Affairs of reference No: MLG/LG/S/72/T dated 30th December 2022.

“The content of the said letter indicated your disloyalty and disrespect to the Executive Governor of the State and the government. It is therefore directed for your removal with immediate effect.

“In view of the above, you are hereby removed from office as Wazirin Bauchi and also as a Council Member of Bauchi Emirate.”

The PUNCH reports that Kirfi was suspended by the Bauchi Emirate Council in March 2017 by the then-governor, Mohammed Abubakar.

The Information officer of the Emirate Council, Salmanu Lame, had, in a statement that was made available to journalists, said the suspension which was for his alleged “disloyalty and unruly behaviour,” was with immediate effect.

However, three years later, following the intervention of Governor Bala Mohammed and wider consultations with stakeholders and the Emirate, in particular, the Emir of Bauchi lifted the suspension in August 2020.

The governor personally visited the elder statesman in his house and presented him with the letter reinstating him as the Wazirin Bauchi where he applauded him for his patriotism, commitment and sportsmanship, especially his efforts in the protection of the rights of Bauchi indigenes and Nigerians in general.

While presenting him with the letter, he said: “I am here with my deputy and other top government officials to pay you this auspicious visit, to present to you a message from the Emir of Bauchi, His Royal Highness, Dr. Rilwanu Suleimanu Adamu.

“On behalf of the government and people of Bauchi State, all traditional leaders, it is my honour and privilege to present you with your letter of reinstatement as Wazirin Bauchi by the Emir of Bauchi. Alhamdulillah, I am so happy that the reinstatement came under my tenure.”