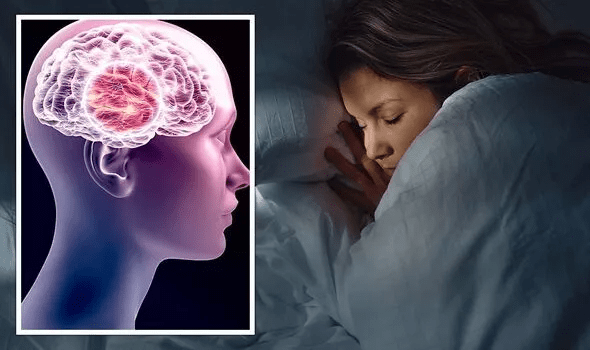 Dementia describes a cluster of symptoms linked to an ongoing cognitive decline. There are many different types of this mind-robbing condition, with Lewy body dementia being the second most common type of progressive dementia after Alzheimer’s disease. It’s triggered by the development of protein deposits, called Lewy bodies, in nerve cells in the brain regions involved in thinking, memory and movement.

Whether you simply can’t doze off or get woken up by a nightmare in the middle of the night, everyone suffers from a bad night’s sleep every now and then.

However, if your partner or flatmates often complain that you are screaming or kicking when you are deep asleep, it might be a warning sign of dementia.

Evelina Sabonaityte, Doctor and Clinical Nutritionist, said: “People with dementia may have difficulty processing complex emotions or experiences from past events due to memory loss or cognitive decline associated with illness progression.

“As a result, these individuals might attempt to express themselves through physical acts instead of verbal communication as those memories become more tangible during sleep states, such as REM [rapid eye movement] sleep when dreaming occurs most frequently.”

One of the five stages of sleep, REM sleep usually starts about 90 minutes after you doze off.

Dreams during this stage are typically more vivid, fantastical, or even bizarre.

According to the Mayo Clinic, Lewy body dementia can lead to rapid eye movement (REM) sleep behaviour disorder, which means you start to physically act out vivid, often unpleasant dreams with vocal sounds and sudden movements.

Sabonaityte said: “These individuals may display similar actions while engaged in dreaming activities, like talking aloud in bed or making movements indicative of performing a task related to what they are dreaming about at the time.”

Patients with this disorder can start punching, kicking, yelling and screaming while they are sleeping.

A review, published in The International Journal of Geriatric Psychiatry, found that at least one form of sleep disturbance is usually present in as many as 90 percent of people with Lewy body dementia.

The research was based on total of 70 articles that included 20 studies focusing on subjective sleep.

The NHS recommends seeing a GP if you have any symptoms of Lewy body dementia.

The health service states: “If you’re worried about someone else, encourage them to make an appointment with a GP and perhaps suggest that you go with them.

“The GP can do some simple checks to try to find out the cause of your symptoms and may refer you to a specialist for further tests.”

How to reduce dementia risk

Although certain risk factors like your age and genetics are non-negotiable, others can be easily switched up.

From a healthy diet to regular exercise, leading a healthy lifestyle is one of the greatest weapons you can add to your arsenal of protection against dementia.

When it comes to your diet, the NHS recommends eating a healthy, balanced diet, while keeping your intake of saturated fat, salt and sugar in check.

Furthermore, other interventions like quitting smoking and cutting back on alcohol could also help lower your risk.