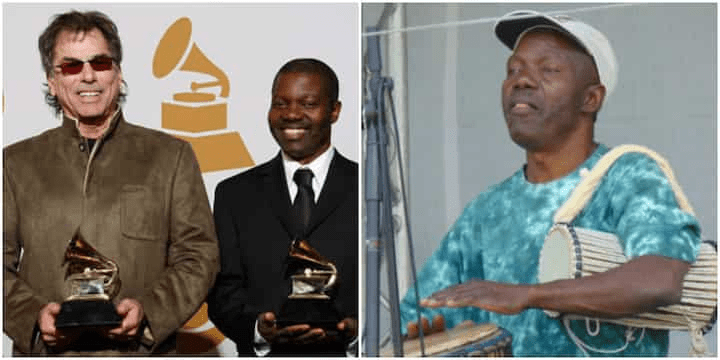 Singer Damini Ogulu aka Burna Boy currently has a special place in the hearts of many young Nigerian music lovers who have always wanted a Grammy-Award win for the country.

After losing out in a 2020 category to Anjelique Kidjo, he returned to the drawing board to work even harder and the result was a Grammy Award Best World Music Album nod for Twice as Tall in 2021.

The singer has once again scored more nominations in the 65th Grammy ceremonies. However, it is important to note that there were others who crawled so that the Last Last hitmaker could walk.

Born in November 1950 to Nigerian parents, Sikiru Adepoju is a master of the talking drum whose soulful mastery of the local music instrument has gained him global recognition.

Adepoju comes from a musically-inclined family that hails from the Eruwa part of Western Nigeria. His knowledge of the talking drum was passed down to him and his brothers by their father, Chief Ayanleke Adepoju, who was himself a revered master of the drum. In fact, a portion of his name “ayan” means “descended from drummers”, Discussioninpercussion, reports.

Sikiru Adepoju’s journey into music Surrounded by a family that breathed music, it quickly became inevitable that Sikiru’s path in life would be one tied to music. At the age of six, he began his tutelage of the talking drum with his father. As a young and talented teenager, Sikiru went on to record several albums with veteran juju music artiste, Chief Ebenezer Ober and his Inter-Reformers Band, Worldmusiccentral reports.

After his stint with the legendary Obey, Sikiru would eventually relocate to the San Francisco Bay Area in 1985, and that was where he met fellow Nigerian music artiste, Babatunde Olatunji. The meeting was one that blossomed into a working relationship, and Sikiru would eventually join Olatunji’s Drums of Passion group, where he spent a lengthy and rewarding 17 years working with the group. He would spend these years recording and touring different parts of the world.

Before Olatunji’s death in 2003, Sikiru’s time in the band saw him working with some international music stars like Stevie Wonder, American guitarist Carlos Santana and the popular rock band, Grateful Dead. He was also featured on Tupac Shakur’s posthumous album, The Rose that Grew From Concrete.

The Nigerian talent would eventually meet Mickey Hart of the Grateful Dead and begin another career phase. Sikiru joined Hart’s Planet Drum group, and they released their debut project, Planet Drum, which climbed up to no.1 on the Billboard chart and remained there for 26 weeks.

In 2008, Sikiru bagged his first Grammy Award for his contributions to Mickey Hart’s Global Drum Project. The talented recording artiste continues to blaze on in the international scene. His, latest project is titled Riddim Doctors.

The Adelekes and the last laugh, by Olusegun Adeniyi

How to Reduce Stress at Home and Work