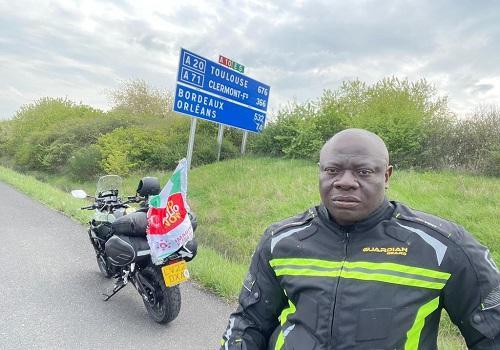 Popular adventurer and London-to-Lagos biker Kunle Adeyanju, has disclosed that he is planning another trip from Lagos to Israel with a new bike.

The Kwara-born adventurer who was recently conferred with the title of ‘Are Aniyikaiye of Offa Land’ by the Olofa of Offa stated this in an interview with Arise TV.

He said his latest plan is to accomplish his adventurous mission no later than 2024.

The Nation reports Adeyanju rode a bike from London to Lagos in a campaign to end polio.

The biker, also known as ‘The Lion Heart’, travelled 41 days from London to Lagos on a motorcycle to achieve the feat.

Adeyanju embarked on his transcontinental challenge in April to raise funds for Rotary International’s fight against polio.

He stated that his next trip will be from Lagos to Israel and then the autonomous Chinese region of Tibet with a new bike.

According to him: “I’m going to buy another bike and do another adventure. My next adventure is going to be riding from Lagos to Israel, just passing through Israel [and] then to Tibet.

“Then, I actually want to ride on a Tibetan plane because that is the highest plateau you have in the world. They say God lives in Tibet because of the highest purity. I want to experience that purity.”

He added he would be visiting the base camp of Mount Everest and attempting to climb it.

“My destination is Everest. I’m going to drop my bike at Everest base camp and try to climb Everest. That’s what I’m going to do with myself in the next two years,” Adeyanju stated.