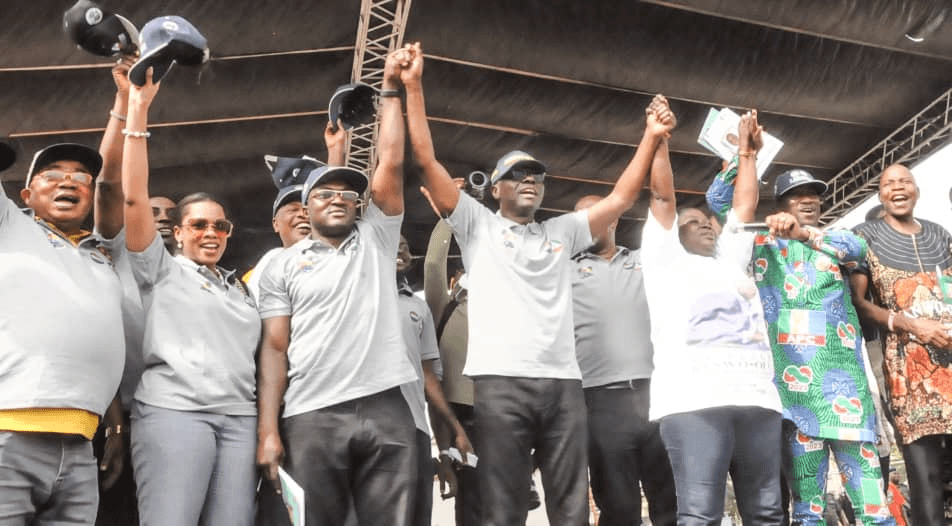 The Lagos State chapter of the Nigeria Labour Congress (NLC) and the Trade Union Congress (TUC), on Thursday, promised to vote for Governor Babajide Sanwo-Olu and his deputy, Obafemi Hamzat, for a second term in office.

The two labour unions, at a rally tagged ‘Labour 4 Sanwo-Olu’, held at the Police College, Ikeja, in support of Governor Sanwo-Olu and Hamzat’s re-election bid, said the duo has performed well during their first term in office and deserves a second term.

Governor Sanwo-Olu said he recognised the support and endorsement of both public and private sectors and promised his government would continue to make life better and liveable for workers in the state.

The governor said his administration would not take workers in the state for granted and thanked them for the endorsement on behalf of the All Progressives Congress (APC) candidates.

The Special Adviser to the Governor on Labour Matters and Industrial Relations, Mr. Babatunde Williams, said the Sanwo-Olu administration had been proactive in putting the welfare of workers at the front burner in the area of salary review and training among other interventions as the impact had been felt in various sectors in the state in its bid to ensure the state remains economically stable despite the  COVID-19 pandemic and other challenges.

In his goodwill message, the Chairman of the Joint Negotiating Council, Segun Balogun said the endorsement for the re-election of the administration was in the right direction because of the laudable initiatives and achievements it has recorded especially when it has to do with workers’ welfare, adding that the governor has taken his place in history.

Chairman Nigerian Labour Congress Lagos State, Agnes Funmilayo Sessi, said this is the first time that labour unions in the state would come out to endorse the candidates of any party in the state saying the union had been sitting on the fence but now wants to take its faith in its hands by supporting Governor Sanwo-Olu’s second term reelection’s bid.

She said the labour movement would engage in politics this time around to vote for the governor and his deputy, Obafemi Hamzat adding that 60% of the people of the state are workers and that they have endorsed them to return for another four years in office.

Also speaking at the event where the hand of Governor Sanwoolu was raised up for endorsement, Chairman, Trade Union Congress, Gbenga Ekundayo said democracy is about inclusion adding that the governor has a listening ear and is accommodating.

2023: Tinubu, the maverick proves his mettle, by Joseph Ushigiale