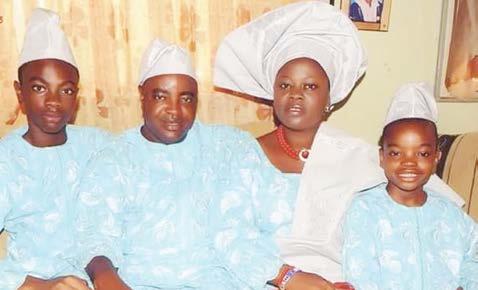 On New Year’s Day, hoodlums attacked the residence of a  worker of the Central Bank of Nigeria,  Kehinde Fatinoye,  and his wife, Oluwabukola, at the GRA, Abeokuta, the Ogun State capital. The hoodlums set the couple ablaze after killing them. They abducted their surviving son, Oreoluwa, and threw him into the Ogun River. The corpse of the son was retrieved from the river on Tuesday. In this interview with  DAUD OLATUNJI, the younger brother of the  CBN worker, Oluwaloseyi Fatinoye, laments the elimination of his brother and his entire family

What is your name?

Who are you to the deceased?

I am the younger brother of Kehinde Fatinoye and the last born in the family.

What can you say about the incident?

I cannot say much about this terrible incident because we did not stay together. I work in Lagos, and my brother lived in Abeokuta. So, I cannot say this is how or why what happened to my brother came to be.

How did you get the information about the incident?

I got a call from my brother’s friend in Abeokuta. He said Tecno (that is my nickname) “you have come down to Abeokuta now.” He said something had happened to my brother, and when I asked what had happened, he insisted that I come to Abeokuta.

I left Lagos immediately for Abeokuta. I went straight to the GRA, my brother’s house.

When you got there, what did you see?

(Crying)… When I entered the house, I went straight to my brother’s room. I saw my brother and his wife burnt. They were dead. I did not know what to do. I didn’t even know where I was. It was like a dream. I was feeling like, “Could this be true?”

How can you describe your late brother?

He was a very humble man. If he met you for the first time, he would accord you respect regardless of your age difference. He was very gentlemanly. He was loved by people. He was easygoing. He had friends. You would never see him where they are fomenting trouble. He respected everyone.

For instance, I was fighting with someone when my brother called, and when he came, he met me fighting the person. Do you know what he did? He begged the man to go and gave him money without asking me what the cause of the fight was. I objected to it, and he said I should let him go. He told me he had to do it in order to keep the peace. That was my brother, very humble and gentle.

In the family, how would you describe him?

In fact, after his death, I am afraid of how many of the family members will take it. His position has become vacant in the family. He was a strong pillar for the family. Nobody can play his role, including me. Look at what happened in the church during the wake.

You can see that my brother was loved by members of the family and others. It was obvious during the wake and funeral service that he was a pillar in the family; almost all the family members attended the service. I want to tell you that there was no one like him in the family. Those who did this will not go free.

How old was your brother?

My brother was 57 years old.

Did he have parents?

He had no parents and no sister.

How old was his marriage?

He had been married for over 20 years before his sudden death.

How many children did he have?

He had two children: Oreoluwa and Oluwatunmise.

Did he have any other children left?

No, he did not have any more. His firstborn, Oreoluwa, is over 20 years old, and he is doing his masters degree. He is dead now. My brother has no children. His family has been wiped out.

What happened to the second child?

He lost his second child, Oluwatunmise, in June. I was told that he slumped during a football match in school and died. I was called for the incident. I was told that the boy, after finishing Senior Secondary School Certificate Examination was playing football, fell, and died. I was the one who buried him. I retrieved his body from the mortuary and buried him at the Kobape Elementary. My brother called me to come to Abeokuta from Lagos. Look at my life. I buried the second born, I buried my brother and his wife, and I am going to bury this one. I’m empty; there’s nothing left for me. (crying)

How will the family miss him?

Again, NNPC fails to remit monies to Federation Account in May as petrol subsidy hits N1.27trn

Davido’s Hit Single ‘If’ Gets Gold Certification in the US