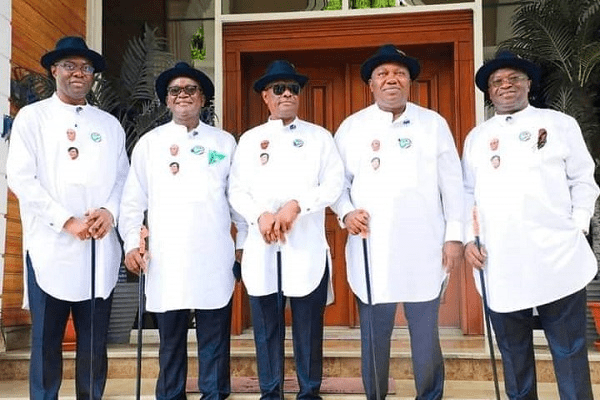 -5 governors on retreat to decide on preferred presidential candidate

There was disquiet in the Peoples Democratic Party (PDP) yesterday as the five aggrieved governors relocated to London to finalise the decision on who to back for the presidency in next year’s general election.

Before they left, the governors had foreclosed working for the presidential candidate of their party, Alhaji Atiku Abubakar.

A source said the governors under the aegis of the Integrity Group are now tinkering with the idea of either backing the candidate of the All Progressives Congress (APC), Asiwaju Bola Ahmed Tinubu, or the flagbearer of the Labour Party (LP), Mr. Peter Obi, for the race.

At a private meeting of three of the aggrieved governors with ex-President Olusegun Obasanjo, he asked the G-5 to support Obi because no Igbo candidate has been elected president.

The governors, who wanted a winning candidate, have been weighing options on the chances of Tinubu and Obi.

It was learnt that their dilemma was not to back the wrong candidate, which will make PDP and Atiku to mock them.

According to a source, the London meeting was crucial because the campaign will peak in January.

They have insisted on PDP National Chairman Iyorchia Ayu’s resignation.

The source said the G-5 governors may kick off the campaign on January 5, and they need to firm up the decision on the choice of a presidential candidate.

The source said the five governors will run campaigns for presidential and governorship elections together, adding that they ought to streamline their position to be able to inform the electorate properly on where they are headed.

The source stressed: “The London meeting is a wrap-up session on their preferred presidential candidate who will also be part of the campaign in their respective states.

“Before they left, the PDP presidential candidate, Atiku Abubakar, was already out of their equation. Both Atiku’s running mate, Governor Ifeanyi Okowa, and Governor Emmanuel Udom did not succeed in prevailing on the G-5 to support the PDP candidate.

They claimed that Okowa and Udom are part of the problem in PDP because they refused to abide by the decision of the Southern governors on the power shift to the South.

“They have drawn the battle lines with Atiku. They have foreclosed any reconciliation. They will now meet at the poll to settle political scores.

“The G-5 governors have to choose between Tinubu and Obi. They have to consider all options, including the consideration of who has the strength or figures to defeat Atiku in the presidential poll.

“It is no longer about sentiments, but facing the reality on whose figures can add up to win the poll for power shift to the South, which is their ultimate objective.”

Another top source said: “The greatest fear of the G-5 governors is supporting a weak candidate who may lose the presidential election. Then, all their objective, plot, and bragging will come to naught.

“Yet, they want to prove a point to PDP that they are a force to reckon with. If they fail to make an impact in the 2023 poll, it will spell doom for their political career.

“As politicians, the G-5 governors have been closely monitoring the campaigns and political trends in the country. They will use available statistics at their disposal to determine whether or not to back Tinubu or Obi.”

Findings, however, confirmed that ex-President Olusegun Obasanjo told three of the governors, who paid him a private visit, to work for Obi to give the Igbo a chance to lead the nation.

A close aide of one of the governors said: “Obasanjo made the plea during a private session with Wike, Ortom, and Makinde.

“Some of the governors are not for Obi, but they are already aiding him with logistics, including free use of stadia for campaign.

A third source, who has been part of the scheming by the governors, listed the choices before the G-5 in London as follows:

*To endorse Tinubu or Obi and damn the consequences

* A flat option: To support Tinubu or Obi with resources and the right environment to woo voters in the five states

* Refuse to campaign for Atiku and allow the electorate in each state to decide who to vote for.

*Keep their game plan to themselves by waiting till the last minutes before making a pronouncement on their preferred candidate.