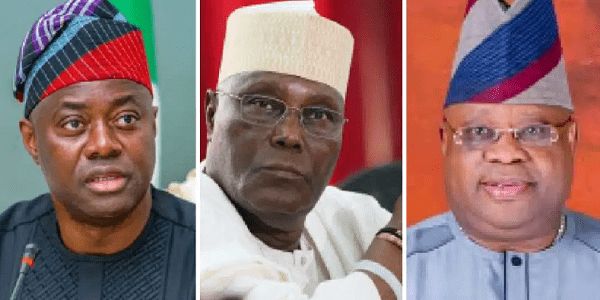 The hope of a truce between Peoples Democratic Party (PDP) presidential candidate Atiku Abubakar and the aggrieved five governors before next year’s poll has collapsed.

A crucial meeting in Port-Harcourt, the Rivers State capital, between the two sides, which their representatives described as final, broke down following irreconcilable differences.

After the talks broke down, the presidential standard bearer decided to look beyond the aggrieved governors and their allies.

Atiku has replaced Oyo State governor Seyi Makinde with Osun State Governor Ademola Adeleke as the Coordinator of his Presidential Campaign Council (PCC) in the Southwest.

A proposal by Adamawa State Governor Ahmadu Fintiri, who represented Atiku, that the yearnings of the G-5, otherwise known as the Integrity Group, will be taken care of after the election, was rejected by the governors, led by Rivers State Governor Nyesom Wike.

The Adamawa governor had pleaded with his colleagues to make a further sacrifice by focusing more on the election instead of insisting on their conditions for a truce.

The G5 governors and other allies, who had insisted that the national chairman, Senator Iyiocha Ayu, should resign, stood their ground, saying that their core demand was non-negotiable.

Ahead of the presidential primary in Abuja, Ayu had promised to step down if a northerner was picked as flagbearer.

However, the chairman, who reneged on his promise, was backed by Atiku who explained that the provisions of the party constitution on the choice and removal of the chairman should be followed.

A party source said that Wike, who spoke on behalf of G-5, said they would neither participate in the PDP presidential campaigns nor lend any support for Atiku in their respective states ahead of the poll.

According to the source, pleas by Fintiri and other party leaders to the aggrieved governors to sheath their swords and retrace their steps fell on deaf ears.

Also, both sides are bracing up for the reality that PDP will go into the election as a divided house.

The source added: “Both sides, those representing Atiku and the G-5, tended to believe that that may be the last reconciliation meeting aimed at resolving the conflict.

“The only concession that Fintiri could guarantee on behalf of Atiku was that the five governors should wait till when the candidate wins before the national chairman can resign.

“As usual, G-5 rejected the proposal and maintained their ground that Ayu should go.”

Following the breakdown of what looked like a final peace move, the former vice president has decided to continue with his campaigns across the country without the involvement of the Integrity Group.

He has reached out to his old allies in the five states, particularly those who are not on the same page with the aggrieved governors and drafted them to his zonal and state campaign structures.

The change of mobilisation tactics by Atiku has further pitted him against Makinde, Ortom, Ikpeazu, Ugwuanyi and Wike, who have turned the heat on chieftains being recruited by Atiku into his campaign from the respective states

In the Southwest, Atiku has dumped Makinde and opted for  Adeleke as regional coordinator.

“He is also wooing his old friends and other chieftains who are fanatical supporters of the PDP across the six states.”

On what is likely to be Makinde’s next step, the source said: “Governor Makinde is campaigning for a second term.

“He is consolidating his PDP base.”

When contacted, the PDP campaign spokesman declined to comment.

Bitcoin Caught Your Attention, Now Blockchain Is About to Catch Fire in the Film Industry