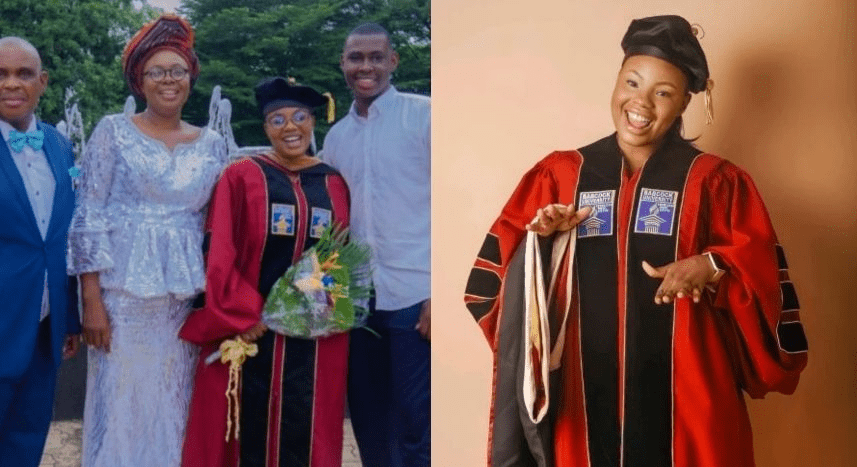 Priscilla Asikhia, a young and talented Nigerian woman, set a remarkable record when she graduated with a Doctor of Philosophy (Ph.D.) from Babcock University in South-West, Nigeria, at the age of 25.

Priscilla Asikhia shared her success on her LinkedIn profile, recounting the ten years of arduous study that it took her to earn a Ph.D.

She stated on LinkedIn that her “successive 10-year education has given me a grounded knowledge of Educational Research, Administration, and Human Resources.”

Priscilla began her higher education at the age of 15, and by the age of 19, she earned a Bachelor’s degree in Business Administration.

At the age of 22, she graduated from her Master’s programme in Business Administration and Management.

Priscilla started her Ph.D. studies in the same semester that she finished her master’s degree in human resources and personnel administration.

She successfully finished her Ph.D. at age 25, making her the institution’s youngest Ph.D. graduate and one of Nigeria’s youngest Doctors of Philosophy.

“I am happy to say that I have just received a Ph.D. degree, making me Babcock University’s youngest Ph.D. graduate. The achievement belongs entirely to God, she said.

In his letter of congratulations to his sister, Iseoluwa Asikhia, the brother of Priscilla, said that his sister’s achievement demonstrates the value their family places on education.

He pointed out that her mother is a doctor and her father is a professor, adding to the family’s success because of her achievement.

Iseoluwa commented on LinkedIn, “It illustrates the value of Education to this Family and we don’t belittle the importance of investing in information at an early age, when you come from a family where your Father is a Professor Olalekan Asikhia, your mother a Doctor, and Sister, who is now a Ph.D. Holder.

Priscilla expressed gratitude to God, her parents, her brothers, and everyone else who supported her academically.