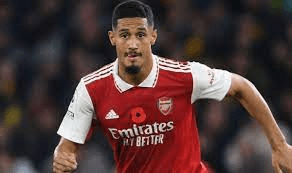 William Saliba remains involved in contract talks with Arsenal and while his World Cup starting snub by Didier Deschamps may delight the Gunners, the long-term impacts might not.

Amongst the chaos of the World Cup and the January transfer window, the third factor affecting Arsenal in this mid-season break is the pressure mounting to renew the contracts of key players. Bukayo Saka and Gabriel Martinelli are the subjects of much talk, but nervousness surrounds the renewal of William Saliba.

Saliba has been the star of the Arsenal team as they lead the race toward the Premier League title, yet question continue about his future. He has one year remaining at the end of his current deal and talk of a new contract has been confidently spoken of by Mikel Arteta.

“I don’t know,” Arteta told football.londonwhen asked if tying Saliba down to a new contract will take more work. “I was really impressed and at the same time surprised when I spoke to him.

“Obviously the way the relationship started, and he went on loan, and he came back, and he went again. If that was a bit of damage there, because obviously he had certain expectations and something happened, but again he was so committed and so focused just to play for Arsenal that I think it took all of us by a little bit of surprise.

“So, if I look at how he talks about the club and how much he wants to be here, I have no doubts that he wants to continue to be here.”

Confident words but as of yet, only rumours have circulated about the potential of a new deal. What was key for the Frenchman was playing ahead of the World Cup so he could convince Didier Deschamps to choose him.

He got his wish. Although so far he is yet to step onto the field.

Speaking in a video on the Arsenal website ahead of the World Cup, Saliba revealed his surprise at his call-up. Unrelated to his Arsenal form, he was concerned that his previous display for Les Bleus had cost him.

“No, because on the last game, I didn’t play well,” he replied when asked about his call up. “I wasn’t sure, bro. But maybe the three or four before, some of those games started to tell me I would be in the squad.”

Arsenal might be delighted that Saliba has so far remained on the bench for Les Bleus. Without playing, Saliba is at minimal risk of injury before the Premier League returns on Boxing Day.

Deschamps has instead favoured Ibrahima Konate, Dayot Upamecano and Raphael Varane, despite Saliba arguably outperforming all three at club level this season. It might not be all positive for the Gunners, which is where the conflict comes in.

Saliba has a clear desire to play and seeing those at Liverpool and Bayern Munich in particular being picked ahead of him might understandably cause him to have second thoughts about an Arsenal stay. If a Bayern or Real Madrid, for example, were to come in, it would be difficult to turn down the opportunity knowing the benefit of being a starter for either side could do for him internationally.

That said, with Arsenal five points clear at the top of the Premier League table, perhaps the Gunners are elevating themselves back into the elite conversation. The 2026 World Cup, therefore, having spent a number of years as a starter for the Gunners, would surely give the then-France head coach plenty of reason to start Saliba; only time will tell.

Trump Establishes ‘Office of the Former President’ in Florida