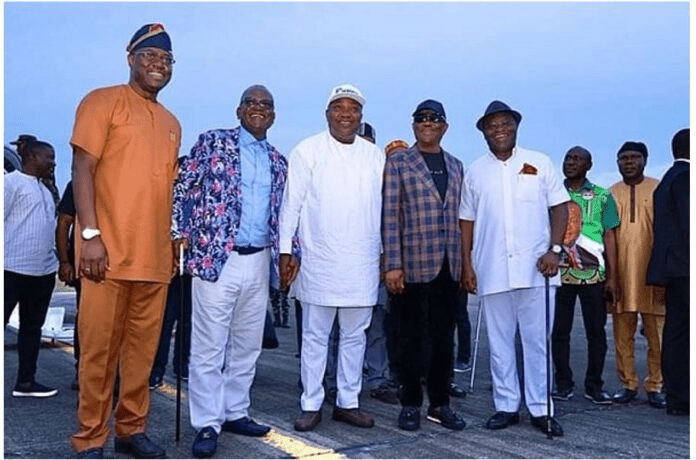 “Atiku’s shuttle to former President Ibrahim Babangida for intervention may not achieve much because some of the Governors are not comfortable with former Minister of Defence Aliyu Gusau who was the facilitator of the visit to Minna.

“They know him as “incurably” loyal to Atiku rather than being a peacemaker.

“The crisis is deep-seated and it has festered beyond what anybody or group can resolve. It is most likely that the two sides will meet on the battlefield.”

Nyesom Wike and his fellow members of the People’s Democratic Party (PDP) G5 Governors have described as mere propaganda talk by Atiku Abubakar of their reconciliation as he has not yielded ground on old demands or laid out a new offer.

Atiku last Thursday expressed optimism about reconciliation with the G5 but they made it known after their meeting in Enugu on Friday that he had not opened fresh talks with them – and that they are not interested in rejoining him, anyway.

Bauchi Governor Bala Mohammed is, however, in a dilemma about joining the G5 because it may jeopardise his re-election.

Mohammed hosted the G5 in Bauchi last week but is non-committal on where he is headed as he is not comfortable with the sentiments expressed by some members of the G5 on the Fulani.

There is also internal wrangling in the Bauchi PDP, making it difficult for him to take a definite position on whether or not to pitch camp with the G5.

“The G5 Governors are not keen or excited to reconcile with Atiku because there are no new terms from the PDP candidate.

“The only offer is that the National Chairman of PDP, Iyorchia Ayu, will sign an undertaking to resign after the 2023 poll. They felt it was not substantial,” a PDP source told The Nation in confidence.

“It means that there is nothing new other than the propaganda of Atiku’s camp that there will soon be reconciliation.”

Some say Atiku is broke, others insist he is being strategic, amid poor PDP campaign funds

G5 declare total war against Atiku – and Ortom thunders, ‘to hell with Atiku and anyone supporting him’

Futility of Atiku’s visit to Babangida

“Atiku’s shuttle to former President Ibrahim Babangida for intervention may not achieve much because some of the Governors are not comfortable with former Minister of Defence Aliyu Gusau who was the facilitator of the visit to Minna.

“They know him as ‘incurably’ loyal to Atiku rather than being a peacemaker,” the source said, per The Nation.

“The crisis is deep-seated and it has festered beyond what anybody or group can resolve. It is most likely that the two sides will meet on the battlefield.

“Some of the G5 Governors don’t want to have discussions with some members of the [PDP] Board of Trustees (BoT). They also don’t trust a few members of the BoT.

“This was why Wike wanted live transmission of the visit of the BoT delegation to Port Harcourt.

“Though the BoT Chairman, former Senate President Adolphus Wabara, managed to prevail on Nyesom Wike to stop the live coverage by TV stations, the Governor did not spare a former leader of PDP in the team, he tongue-lashed the leader in a despicable manner.”

Atiku yet to open fresh talks with G5

A strategist with the G5 insisted “the former VP is yet to open fresh talks with Wike and others. These Governors are just reading the story of reconciliation in the media without concrete action.

“The Bauchi Governor may not team up with the G5 because of the delicate politics of the state.”

Mohammed in a quandary

“Mohammed was non-committal to Wike and four others. He left the invitation by the G5 hanging and the Governors decided to be watching,” a former Minister told The Nation.

“It was predictable because Governor Bala cannot join a group which will be abusing Fulani. He made his feelings known on anti-Fulani comments. No wonder, Governor Samuel Ortom seized the opportunity of Bauchi visit to say that he was misquoted.

“If Mohammed joins the G5, his second term aspiration will be in a precarious state. He is battling for survival.

“Despite his good performance, some forces are against him in the state, including some strategic PDP leaders like Adamu Muazu (former PDP National) and ex-House of Representatives Speaker Yakubu Dogara.

“With internal wrangling in the Bauchi chapter of the PDP, he decided to bide his time to weigh options.

“But the G5 Governors told Mohammed that they have left their doors open. They said he can come to the camp anytime.”

June 12: Fight breaks out among #IStandWithBuhari protesters in Abuja over money

Davido’s Babymama, Chioma Opens Up On How She Forged Her Parents Signature

Atiku, others receive Shekarau back to PDP today