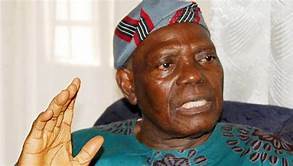 MINISTER of Interior, Rauf Aregbesola, was noticeably absent at a meeting held at the Ila country home of the ex-Interim National Chairman of the All Progressives Congress, Chief Bisi Akande, to discuss party unity.

The gathering was a meeting of the Osun APC Elders’ Caucus designed to unite party members.

Although the meeting was held behind closed doors, it was learnt that the former Deputy Speaker of the House of Representatives, Lasun Yusuf, said many party members were aggrieved as a result of the 2018 Osun APC Governorship primary. He appealed to the elder statesman to assist in reconciliatory efforts before the next cycle of elections.

Briefing newsmen after the meeting, Akande, said the elders met regularly to discuss party issues, until the advent of COVID-19 last year.

He said, “the meeting had always existed, but because of COVID-19, the meeting had not been held for a very long time. It is the beginning of elders’ activities to move the party forward in Osun.

“We are doing all our best to resolve every crisis. I can assure you that there will be no crisis within our party before the election. We come from different constituencies in Osun and we are going back to let our people know we have started to be more active than before.”

Asked who would be flagbearer of the party in the next year’s governorship poll in Osun, Akande said, “I don’t know who our candidate may be in the forthcoming guber election, but I can assure you that our candidate will win the election in 2022.”

On the issue of the zoning of the APC 2023 Presidential ticket, he said the South will square up with the North, and “whoever becomes our candidate will win the presidency.”