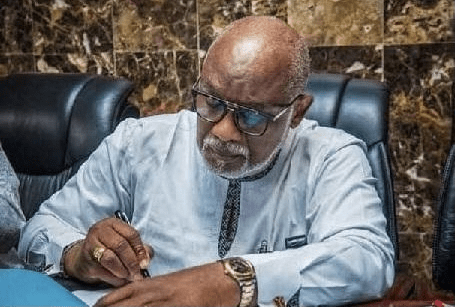 The budget, christened ‘Budget of Shared Prosperity’, is about N3 billion above the N272.736 billion initially presented to Ondo State House of Assembly.

Mr Akeredolu signed the budget at the Exco Chambers of the governor’s office, Akure, on Wednesday, with the assemblymen present.

He explained that the financial appropriation was prepared with inputs from the people during the town hall meeting with various stakeholders across the state.

While appreciating the lawmakers for the speedy passage of the budget, Mr Akeredolu said the budget preparation was based on the “REDEEMED” agenda of his administration, noting that it was a guidepost for the development of the state.

Meanwhile, the governor has described as heartwarming, the recent ranking of Ondo as the state with the least poverty index in the country.

Mr Akerdolu noted that the ranking by the National Bureau of Statistics in collaboration with the United Nations Development Programme (UNDP), and United Nations Children’s Fund (UNICEF) 2022 Multidimensional Poverty Index of States in Nigeria, was a sign that his administration is on the right track.

He, however, decried the lean revenue from the Federation Accounts Allocation Committee (FAAC) to the state, assuring that his government would strive to logically implement the 2023 budget to the letter.

“In line with the global best practices, we have strategically cut down the overhead costs and other miscellaneous expenses in order to free funds for Development Programmes and Projects.

“In a broad view, the 2023 Budget packaged is made up of transformative infrastructural projects, inclusive social-economic interventions in healthcare, education, job creation and empowerment, industry enablers, among others, for our state,” Mr Akeredolu added.

He further noted, “I solicit the understanding of the people of the state and enjoin them to pay their taxes. I also solicit the support of all the MDAs, particularly the revenue-generating ones, to cooperate with the State Internal Revenue Service in order to shore up the State’s Independent Revenue that will engender growth and development in the coming fiscal year.”

Akintomide Akinrogunde, the Chairman of the House Committee on Appropriation, revealed that the budget was increased in cognisance of the current economic realities in the country.

Remarking, House Speaker Bamidele Oloyelogun, saluted the governor for giving priority attention to all sectors of the economy of the State.

Mr Oloyelogun noted that the pace of infrastructural development in the state was highly noticeable despite the paucity of funds.

“All these are manifestations of Mr Governor’s strong resolve and determination to take this State to the level he envisioned.

“Let me also commend him for the timely presentation of this fiscal document which led to its early passage,” Mr Oloyelogun added in his remark.