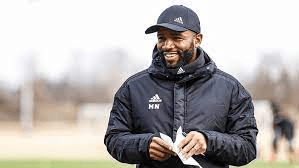 The U.S. Soccer Federation has appointed a US-based Nigerian tactician, Michael Nsien, as the new head coach of the country’s U-16 Men’s youth national football team on a three-year deal.

Nsien, with over 23 years of experience as a player and coach for clubs in the United States, becomes the first Nigerian to take the reign of the U.S. U-16 Men’s youth national team.

Nsien, born in Oklahoma of Nigerian roots, holds all the UEFA Pro Coaching licenses and is seen by his peers in the U.S. as a “trailblazer” for black coaches in a sector with very few black coaches.

“I feel really good about getting this role and opportunity as a first-generation Nigerian American, it is really important to me that we show that my family name and the people of Nigeria are exposed and represented in a positive way not just in the U.S. but across the world.

“I think this opportunity will bring life upon my name, my family and my country Nigeria as well and also as an American, I have a great sense of pride to represent our country and to help get the next generation of American players to the forefront”, Nsien said.

The 41-year-old has managed USL Championship side FC Tulsa for four seasons, leading the side to the MLS Cup playoffs.

Nsien however hinted that this new role will open new opportunities and new experiences for him.

Amotekun killed My Cousin, Shot Five Others in Our Family House –Eyewitness

How to Start a Side Hustle: Find Your Idea