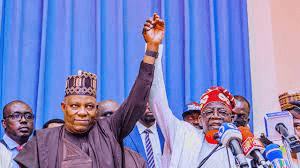 Bola Tinubu, the presidential candidate of the All Progressives Congress (APC), says Kashim Shettima is the best choice as his running mate.

Tinubu said this on Wednesday at a meeting with the leadership of the Christian Association of Nigeria (CAN) in Abuja.

In July, Tinubu’s announcement of Shettima as his running mate elicited widespread criticism — including from CAN.

However, according to a statement by Tunde Rahman, his media aide, Tinubu said he will not run his administration on the basis of religious affiliation if he is elected president.

“I did not choose Senator Shettima so that we could form a same-faith ticket. The ticket was constructed as the same progressive and people-based ideology ticket,” Tinubu said.

“I offer a confession. I selected Senator Shettima thinking more about who would best help me govern. Picking a Christian running mate would have been politically easier. But the easy way is rarely the right one. The selection of a running mate is at once a very momentous yet very intimate decision.

“Resting such a key decision on religious affiliation as the primary weight did not sit well with me. I am not saying there were not good and adequate potential running mates of the Christian faith.

“What I am saying is that the times we inhabit do not lend themselves to the good or adequate. We have urgent problems that lend themselves not to a Christian or Muslim solution. We need the best solution.  Every time I thought about it, and I did think a lot; I came to the same conclusion: Kashim Shettima.”

On its part, the CAN leadership, led by Daniel Ukoh, its president, presented a charter of demands to Tinubu. In the charter, CAN demanded state police or a decentralised policing system, devolution of power to states, equal rights for all religions and their adherents, and the right to self-determination by all ethnic groups.

CAN’s demands also included the right to control natural resources by communities that bear them, no to open grazing, and an equitable electoral system that guarantees the right to vote and be voted for by all.

US Issues Fresh Directive To Nigerians, Others Denied Visa Due To Trump ‘Muslim Ban’