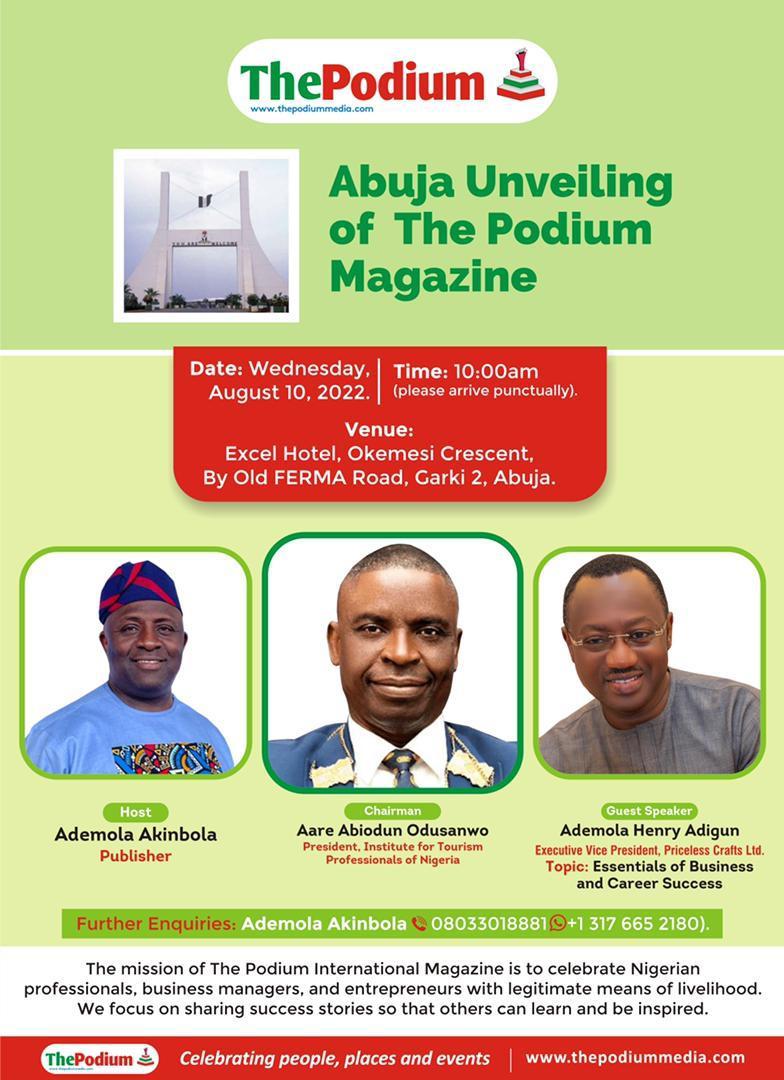 Mr. Ademola Henry Adigun, the Executive Vice President of Priceless Crafts Limited, will be the guest speaker at the formal unveiling of the print edition of The Podium International Magazine in Abuja on August 10, 2022.  He will be speaking on the Essentials of Career and Business Success at the event scheduled to hold at Excel Hotel, Okemesi Crescent, Garki 2, Abuja, under the chairmanship of Aare Abiodun Odusanwo, President of the Institute for Tourism Professionals of Nigeria (ITPN).

Adigun is a developmental consultant with over 20 years of experience. He was until March this year, the team leader of the Facility for Oil Sector Transformation Project (FOSTER). He was responsible for managing the strategy for delivery of the project alongside a team of other capable professionals.

A statement signed by Mr. Ademola Akinbola, Publisher of The Podium Magazine, stated that the Abuja unveiling is coming on the heels of the successful presentation of the magazine to select audiences in the USA, UK, and Lagos. According to Mr. Akinbola, the strategic intent of The Podium magazine’s Board of Directors is to place the magazine in the hands of as many Nigerians as possible in Nigeria, and the Diaspora.

The Podium is a general interest magazine that started with an online edition in 2018 via www.thepodiummedia.com. The print edition was unveiled in 2021 in major American cities such as Houston, Indianapolis, Maryland, and New York. The magazine has also been unveiled in Lagos, Nigeria, and London, United Kingdom. The second UK unveiling will take place on August 24 in Manchester. The global unveiling of the magazine is expected to continue in Ibadan (on August 17); Johannesburg, South Africa (on October 1); Brussels, Belgium, and Toronto, Canada (dates to be confirmed).

Mr. Akinbola disclosed that the purpose of The Podium Magazine is to provide a credible platform for positively projecting Nigeria and Nigerians. It will also serve as a change agent in enthroning a new value system among Nigerians in Nigeria, and the Diaspora. “Our vision is to be globally reputed and acclaimed for identifying, showcasing, and serenading the success stories of young Nigerians as a way of positively projecting the image of Nigeria”, he added.

He stated: “We will decidedly and consistently share credible and verifiable success stories of Nigerians so that others can learn, be motivated, and be inspired. We will partner with the government and its agencies, as well as corporate organisations in changing the value system of Nigerians, and institutionalizing a new culture that rewards and appreciates hard work and integrity.

He noted that the team at The Podium Magazine is committed to building a global media brand that will celebrate the good deeds of Nigerians all over the world. The culture of blame, criticism, and condemnation must be replaced with a culture that appreciates and celebrates good people while they are still alive, he opined. “As a people, we are quick to condemn but slow to commend. We sometimes also celebrate people with dubious pedigree. This must stop. A lot of Nigerians are doing exploits all over the world, unnoticed, unrecognized, and uncelebrated. The Podium is out to change this order “, he said.

The magazine is published six times a year, he said, adding that due to its global presence, The Podium has become a veritable platform for entrepreneurs and business managers to advertise their goods and services. The magazine has its Global Headquarters in the United States where it is registered in the State of Indiana as The Podium Media. It is equally registered in the United Kingdom, with the UK Bureau, based in London, overseeing its European operations.

As a community development enthusiast, he has been publishing Ile-Oluji Times, Nigeria’s first international community-focused newspaper since 2011, as a way of promoting Ile-Oluji, headquarters of Ile-Oluji/Oke-Igbo Local Government Area of Ondo State.