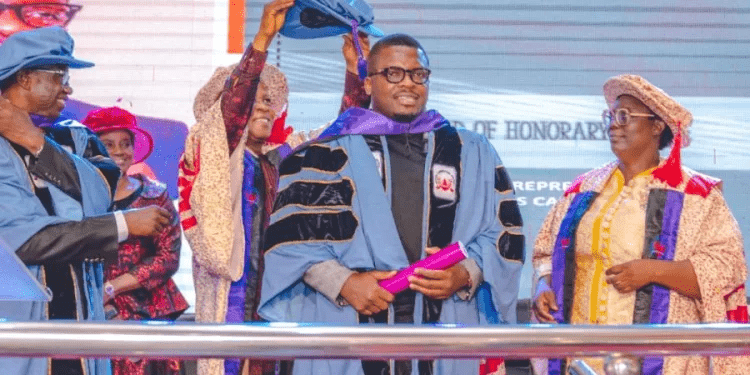 In 1993, Nelson Mandela bagged the Nobel Peace Prize for his work for the “peaceful termination of the apartheid regime, and for laying the foundations for a new democratic South Africa”. This award was given to him not because of what he had done but for the prospect of what he could do for his Nation, South Africa. To understand the dynamics of a successful entrepreneur, you would need to measure their past glory, their present achievements, and the expected trajectory of their future accomplishments.

Dr. Sijibomi Ogundele, alongside President Olusegun Obasanjo and Bishop David Oyedepo were also Awardees at the School’s Maiden edition of its convocation ceremony in Ibadan.

Speaking during his acceptance of the honorary doctorate degree, Dr. Sijibomi Ogundele praised the University as one founded on the foundations of Entrepreneurship. He also urged all graduating students to become leaders of their generation as they step into the world as future entrepreneurs. He said; “A man without a dream is an empty man!”

He shared his story of how he won an “ovarian lottery” when his beloved mother, diligently imbibed the spirit of entrepreneurship in him from the tender age of 4. He also shared the story of how he started his company 9 years ago with only 1 staff and today, the Sujimoto Group has over 600 active staff.

According to him; “Many thought I couldn’t even oversee the building of a kitchen, today, we are building 15-storey buildings and currently planning the development of a 44-storey Twin Towers. These are only possible because as a forward-thinking entrepreneur in an ever-changing world, I have ingrained in my mind and planted in my heart the D.I.E philosophy – Diligence, Integrity, Excellence. The diligence of going the extra mile to achieve customer satisfaction, the Integrity of being a man of your word and doing what you say you will do, and the Excellence of providing the best quality products that ensure we leave our clients better than we met them.

Dr. Ogundele also reiterated: “Innovation must be the foundation of our projects, and diligence should be embedded in our DNA. More than ever, I appreciate those lessons from my mother, as they have given me an edge in the world of entrepreneurship, placing me as arguably one of the top 10 entrepreneurs in Africa and top 100 in the world.”

Dr. Sijibomi Ogundele is the undisputed Serial Entrepreneur of Luxury real estate maestro is the GMD of the developers of the iconic LucreziaBySujimoto tower in Banana, the much-talked-about LeonardoBySujimoto – a 25-storey waterfront high-rise, and the powerful initiative – Sujimoto Twin Towers – a luxurious but affordable housing scheme where with as little as $380,000 anyone can experience a piece of the luxury Sujimoto Group offers. Ogundele is obviously one of the most outstanding entrepreneurs in his generation and this young entrepreneur who emerged from Agege to become the youngest Billionaire in Nigeria, is not resting on his laurels as we a re patiently waiting for more.

I Am Being Blackmailed Because of National Identification Number – Isa Pantami