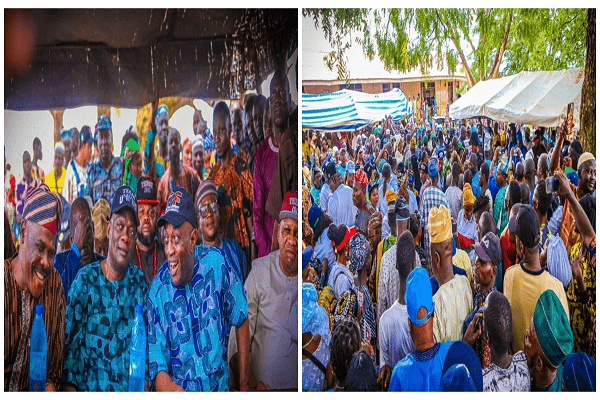 Speaking on behalf of the defectors, Akinjide said they were pleased with the way Senator Folarin received them.

Kalejaye stated that the performance of Senator Folarin and his emergence as governorship candidate informed their defection, saying the victory of APC in 2023 would benefit not only Ona-Ara LGA but the entire state.

Welcoming the defectors on behalf of Folarin, the Chairman, the National Lottery Regulatory Commission, Alhaji Fatai Ibikunle assured them of fairness and equity in the new party.

“I welcome you to our great party, APC as new members, and assure you of all rights accrued to the rest of our members.

“We will ensure that you benefit from every opportunity regarding the welfare of members without sentiments,” he said.

He charged the new members to aggressively mobilise for 2023 electoral victories of all APC candidates.

Folarin commended the defectors, saying they had made the right decision by joining APC.

He promised to carry them along in all party affairs and ensure they benefit from all available opportunities.

He urged them to go to their respective wards and attend party meetings regularly for updates and other things concerning the party.