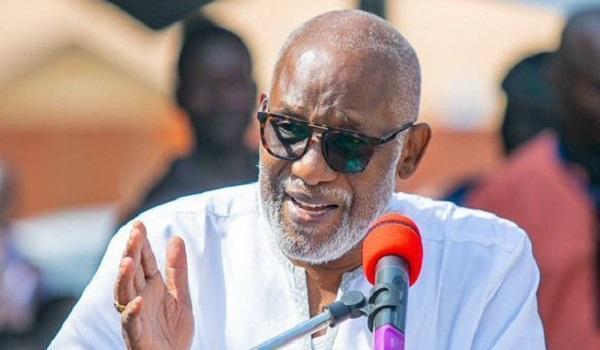 The news of the appointment of Babajide Akeredolu has generated needless furore  and brought to the fore the penchant of the Peoples Democratic Party, PDP, to scream wolf when none is in sight.

For the records, Babajide Akeredolu was nominated by our great party on the strength of his relentless contribution to the overall success of the APC in Ondo State and not as the Governor’s son.

It is important to note that this young man did not emerge overnight from the blues.  He has been on ground for an appreciable length of time as resource person to the party and has consistently and diligently proven his mettle, at personal cost, in not only joining other party faithful in building the party but also going the extra mile in ensuring improvement is recorded by the party which has largely enhanced the electoral value of the APC as well as the fortune of our great party.

Perhaps a run-down of his recent outstanding contributions to party building and success at the polls would suffice.

The young man on his own volition used his contacts to generate resources and relief materials for the people in the height of COVID-19 pandemic last year; nobody cared he is the son of the governor.

It is also verifiable testament that this same young man worked practically round the clock for the party by deploying state-of -the-art technology in helping the party in the 2019 General Election which ultimately earned the APC a resounding victory. No one labelled him the governor’s son.

When he was using his resources to mobilize the teeming youths of the state for our party, APC, towards the 2020 governorship election in Ondo State, nobody identified him as the governor’s son.

A true patriot and a genuine son of Ondo State, Babajide Akeredolu performed the aforementioned feat pro bono for our party and ultimately to the greater glory of Ondo State

To whom who has contributed so much to a cause; by the same token deserves appreciation from the society. Now that Babajide Akeredolu is being rewarded for all his hard work and devotion to the cause of the party, it therefore came as a surprise that a few in the opposition could needlessly raise eye brows.

When has it become a violation of the constitution to appoint a hard-working, devoted, loyal and committed party man into a government position?

As a political party, Babajide, with all sense of modesty can be described as a great asset to the APC in Ondo State and we fully endorse his appointment. The only honourable way we can express our appreciation to any member who is adjudged to have worked and with sincere loyalty to the party is to recommend such hard-working party man or woman for appointment by the government. This goes beyond appreciation but also a sure way of giving such a diligent party member a sense of belonging.

Babajide Akeredolu is one of such persons recommended to Governor Akeredolu for appointment and we are glad he obliged the party.

The brewing criticism of Babajide Akeredolu’s appointment by the opposition party is understandable because of their fear of what the young, brilliant man is capable of bringing to the table that will further enhance the fortune of the state. His capacity to innovate as an outstanding technology wizard will invariably open up a wider window of opportunities for the state in terms of patronage, technological breakthroughs for enduring iconic and legacy projects in our beloved Ondo  State.

This is what the opposition PDP detests. But they’re wrong to have opposed the development of the state which our party APC stands for.

However, the good people of Ondo state, especially the teeming majority of the youths whom Babajide has, with his modest efforts, helped in raising their standard of living via exposure to technological innovative ideas, are very pleased to see one of their own breaking the glass ceiling by being given the opportunity to serve in government.

To us as a political party, we welcome this development and genuinely acknowledge the appointment of Babajide Akeredolu as the Director General, Performance and Project Implementation Monitoring Unit (PPIMU) as a call to service.

We therefore urge him not to be distracted by wailers and the ranting of the opposition party who is not only envious of his accomplishment but also fearful of greater things to come from his reservoir of knowledge that will propel our party to greater heights and secure victory for the APC in the state in the 2023 general elections.