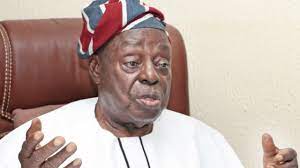 A Senior Advocate of Nigeria and founder, Afe Babalola University, Ado Ekiti, Aare Afe Babalola, said on Tuesday that Nigeria would grind to a halt if it should conduct the 2023 general elections with the present 1999 Constitution.

Babalola said to avert the collapse of the country in view of the challenges created by the constitution, there was an urgent need for the National Assembly to pass a resolution adopting the 1960 Constitution before the next general elections.

The legal luminary spoke in Ado Ekiti during a ceremony to commemorate the 12th anniversary of the establishment of ABUAD, an institution he said had through research “contributed immensely to the socio-economic development of the country with timely innovations across all sectors.”

He said, “I am happy that I conceived this university 12 years ago and since then, we have been going from strength to strength, making exploits in all our endeavours. Our vision is to make this place a great institution in university education in the country through teaching, research, and community service.

“I can confirm to you today that our herbal drug produced through extensive research by our team of researchers has healed about 19 patients, who were infected with COVID-19. They were healed perfectly in less than five days of use. That tells you the level of our research in ABUAD.”

The founder invited the President, Major General Muhammadu Buhari (retd.), to visit the university and see the landmark achievements in the last 12 years with a view to “finding a way of replicating ABUAD in the different geo-political zones of the country.”

Babalola said, “We must avoid recycling the old failed leaders in the governance of this country. Any mistake of electing a new set of leaders under the present constitution will ruin Nigeria completely.

“The simple way out is for the National Assembly to pass a resolution adopting the 1960/1963 Constitution with necessary amendments such as having in place six regions and a one-house parliament.”

The educationist faulted the National Assembly over increasing creation of universities across the country, saying the development had usurped the power of the National Universities Commission as prescribed by law on the establishment of the institutions.

Babalola, who said the development would have adverse effects on the nation’s education sector, called on the Ministry of Education and the NUC “to exercise their powers to checkmate this in the interest of quality education in the country.”

“Every attempt must be made by all stakeholders to put a lid on the establishment of political universities that hardly survive those who put them in place after they are out of power, otherwise there will be a crash in the quality of private universities,” he added.