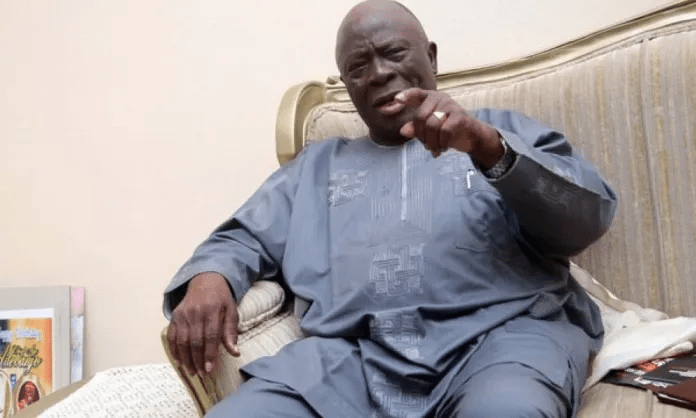 For the umpteenth time, Ayo Adebanjo, the nonagenerian Leader of Pan-Yoruba sociopolitical group, Afenifere, Chief Ayo Adebanjo, is warning Nigerians of the dire consequences of not making Peter Obi, presidential candidate of the Labour Party (LP), in next year’s election, saying it would be akin to falling from fire into a furnace.

His admonition, came less than 24 hours after former President, Olusegun Obasanjo, officially endorsed the former Governor of Anambra State, saying he towered over other candidates, including Atiku Abubakar of the Peoples Democratic Party (PDP) and Asiwaju Ahmed Bola Tinubu, of the All Progressives Congress (APC), who are also angling for the nation’s number one job.

Adebanjo, who hailed Obasanjo for standing out with his courage to declare his choice of Obi publicly, said he was not surprised by the action of the former President, as he had always been in support of power shift to the South East in the interest of equity, fairness and justice as well as keeping the country together.

Daily Trust quoted Adebanjo to have said Nigeria would be in trouble if the people failed to vote for Obi, adding that the decision of Afenifere to support Obi was ideological and principled, because other regions except the South-East had enjoyed the privilege of being in the saddle.

Stressing that there was no justification for the APC Presidential Candidate, Asiwaju Bola Ahmed Tinubu, to contest when Obasanjo, from the South-West, was President for eight years, he said the same thing applied to the PDP candidate, Alhaji Atiku Abubakar, noting it was wrong for another Northerner to take over when a Northerner is exiting.

His words: “How are you going to justify Tinubu when Obasanjo had spent eight years? Or how do you justify Atiku when another Northerner is leaving the place? That’s the crux of the matter. The South-West has done, South-South has done, is South-East not part of Nigeria?

“Those who believe in principle would support our position. “Don’t bring in ethnicity. I said it in my statement. If it is about ethnicity, I should support Tinubu. I made him the governor but I am not supporting him as President. Yoruba people don’t cheat others.

“We cannot talk of a united Nigeria when the South-East has not had it. I am not like Atiku who said he wants to keep Nigeria. How can you do that when you are denying a part of Nigeria its right?

11 Things Women Do That Turn Men On