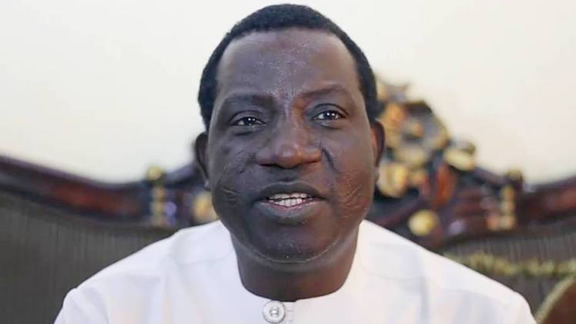 Governor Simon Lalong of Plateau State has confirmed the removal of Chief Letep Dabang as the chairman of the All Progressives Congress in the state.

The Governor made the announcement on Saturday night during a lecture and dinner organised for stakeholders as part of the activities to mark the June 12 Democracy Day which held at the Rayfield Government House in Jos.

Lalong who stopped mid-way in his speech to introduce the new State Chairman of the APC said, “We have a new APC chairman in Plateau. He is here with us. I saw him trying to send a text message using his phone and I said, let me stop here and recognise him before he will suspend me.”

Although the Governor did not speak further on the matter, it was gathered that the former APC chairman who was replaced by his Deputy, Enough Fanmak, was accused of anti-party activities which led to his suspension.

Dabang’s suspension was contained in a letter written to him by the party’s National Secretary, Caretaker/Extraordinary Convention Planning Committee, Sen. John Akpanudoedehe.

The letter dated June 11, 2021, read in part, “The Party is in receipt of a correspondence suspending you from office as the State Caretaker Chairman of Plateau chapter of our party, over anti-party activities.

“The information of your suspension contained in a document endorsed by a good number of members of the State Executive Committee, of which the Executive Governor of your state equally serves as a member, cannot be ignored.

“Therefore, in line with the posture of transparency of the Caretaker/Extraordinary Convention Planning Committee (CECPC), the National Chairman H.E. (Hon) Mal Mala Buni, has authorized the constitution of a 3-Man Fact Finding Committee.

“The committee is to look into the allegations as averred, with a view to determining the veracity or otherwise of the claims.

“In the circumstance, you are to step aside from your position as state caretaker chairman while the Deputy State Caretaker Chairman will act in your stead, pending the conclusion of the findings of the committee,”

How to foster national unity, by Kukah, Fayemi, Aremu