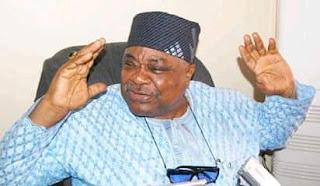 The All Progressives Congress (APC) Elders Advisory Council in Oyo State, has disclosed why former President, Goodluck Jonathan can’t be president on the platform of the ruling party.

Chairman of APC Elders Council in the state, Otunba Adebayo Alao-Akala, explained that the party has people already lined up to become president.

The former governor of the state spoke while featuring on Agidigbo 88.5 FM in Ibadan.

He, however, said the former president was free to join the APC but should dismiss the notion of becoming the party’s presidential candidate in 2023.

“I am not saying Jonathan can’t join APC but he can’t be president under APC in 2023.

“I’m not saying Jonathan can’t be president but it can never be under APC in 2023 because some people are on the queue already,” he said.

Lately, Jonathan has been linked to APC.

There are claims that the former president would jump the Peoples Democratic Party, PDP, for the ruling APC.

The rumours had it that the Bayelsa-born former president would become the party’s presidential flag bearer if he join APC.

Jonathan is, however, silent over the rumours making the rounds.

Meanwhile, the APC has said Jonathan would be welcomed if he decides to join the party.

Teenager disappears while going to church