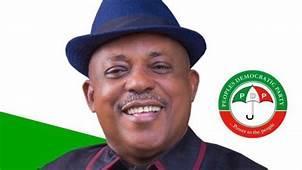 Former National Chairman of the People’s Democratic Party, Mr. Uche Secondus, says he has no intention of withdrawing the case challenging his removal from court.

Mr Ike Abonyi, his Media Adviser disclosed this in a statement in Abuja. Abonyi said that Secondus was in court to seek justice as well as save the party from manipulations.

“The attention of the media office of Secondus has been drawn to an unsubstantiated report claiming that he is under pressure to withdraw his case against the party from the court.

“The truth which the said news did not state is that Secondus is not in court against the party, but was dragged to court by persons bent on hijacking the soul of the party.

“For the avoidance of doubt, the media office wishes to restate that Secondus is really under pressure for justice and will seek it anywhere to save the party from destruction,” he said.

Abonyi said that the party leaders were aware of the situation and knew what to do to rectify the problem.

“Nothing short of justice will save PDP from the current situation.

“For the avoidance of doubt, the justice Secondus is seeking is as enshrined in the party’s constitution which is supreme.

“The constitution states clearly how a national chairman and any national officer can be sanctioned even where there is a known breach, talk less of where there is none,” he said.

How lady defied road accident to bag degree after 14 years