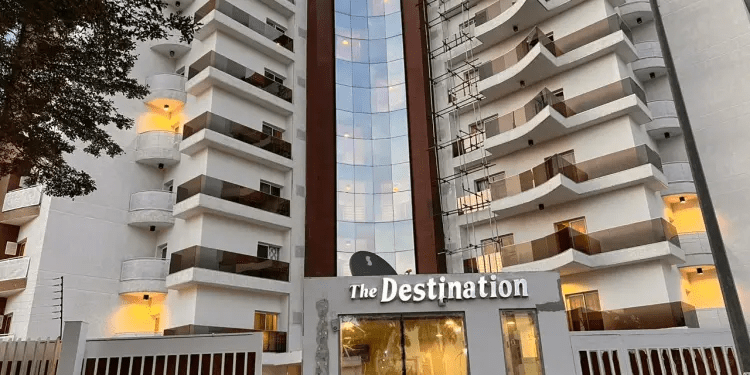 In Nigeria’s Capital City, Abuja, the Founder & Chief Executive Officer of Smart Residences Limited (Also known as Gidanka) recently unveiled its latest addition to its line of Prestigious apartments. This project named THE DESTINATION by Gidanka, promises to be its best work yet.

Outdoing its grandeur predecessor, The Glass Residence, located at Jabi in Abuja.  The Destination is situated in the heart of Wuse in Abuja. The 5-star luxury apartment has various intriguing amenities and offers to look out for with an appeal to cater to fun and leisure seekers, as well as business executives and vacationing families.

The Destination is that destination everyone both inside and outside Abuja should look forward to visiting.  The Destination is a World Class hospitality residence that offers a soothing 360-degree sky view of the city center, it’s a building consisting of 110 units of luxury apartments, including Studios, Two Bedrooms, Three Bedrooms, and a 4-bedroom Penthouse, and also houses 2 well-equipped meeting rooms and a capacity hall to host events or conferences for both relaxations and informal private meetings.

Olajide Abiola, CEO/Founder of Gidanka, stated that “Excellence takes time and discipline. And as with every project that Gidanka has completed, these were the watchwords. We were determined to ensure that The Destination is the toast destination for visitors across the world visiting the Capital City.

The project, whilst taking 13 months as we began in November 2021, I must say was only made possible with credible support and partnership with the Norrenberger Advisory Partners and Fidelity Bank PLC, who saw, understood, and believed in our vision”.

Quizzed further on why the name “The Destination”, Olajide had this to say “So you recall that we started The Residence in Katampe, then created the Glass Residence in Jabi. The aim of those projects was to provide upscale living and workspaces. However, with this project, we wanted to produce something that cuts and encompasses both the upscale living and working spaces, but also fits as a recreational, business, and vacation space within the city of Abuja. Making this the first-of-its-kind Destination, where you can have all these varying uses and functionalities in one place. A guest can stay here and have all they want without leaving to access anything elsewhere, it is naturally made it to be called “The Destination”.

He further stated that the era of The Destination would provide the citizens with a world-class experience that is equivalent to what can be gotten outside Nigeria, so rather than going through the rigorous process of currency exchange and buying other countries’ currency at a higher rate, you can enjoy vacationing spending your own currency (The Naira), this helps the circulation of Naira and also reduce the Forex pressure.

Also speaking, Aliyu Hassan Aminu, the Chief Operating Officer, disclosed that “The Destination is ready and fully functional now, and our staff is glad to welcome both you, your family and friends, members of staff, honeymooners, tourists and the general public to our premises. We guarantee that they would find The Destination to be great value for their money.”

Watch out for a comprehensive interview with Mr. Olajide Abiola and more information on The Destination in the January print edition of The Podium International Magazine available from January 16.

Most Nigerian guys don’t want me, they want my billionaire Dad – DJ Cuppy