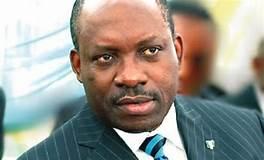 The Supreme Court on Thursday in Abuja affirmed a former governor of the Central Bank of Nigeria, Prof. Charles Soludo, as the governorship candidate of the All Progressive Grand Alliance.

The apex court also returned Chief Victor Oye as the national chairman of the party.

Delivering a judgment of a five-man panel of justices, the court dismissed the appeal filed by Jude Okeke on the grounds of being an abuse of court process and lacking in merit and substance.

Recall that Okeke had been in court over whose APGA faction was authentic between his and that of the Victor Oye-led faction.

But Justice Mary Odili, who delivered the lead judgment on Thursday awarded N1m against Okeke to be paid to APGA and Oye, upheld the judgment of the Court of Appeal, Kano Division, which had earlier dismissed Okeke’s suit.

The apex court berated the appellants for engaging in forum shopping and abuse of the court process.

The unanimous judgment also took swipe at Okeke and some lawyers for attempting to mislead the court through multiple cases over the same matter.

Justice Odili said “the appellants in the desperate bid to abuse the court moved their cases from Anambra State to Imo State and later to Jigawaa State,” where they eventually got judgment in their favour on March 31, 2021.

The Jigawa court judgment was, however, voided and set aside by the Court of Appeal (Kano Division) on March 8, 2021.

The apex court also agreed that the election of political officers was an internal affair of respective parties and could not be challenged in court.

A statement by the Commissioner for Information and Public Enlightenment, C-Don Adinuba, said the Supreme Court had demonstrated that the Nigerian judiciary was a temple of justice.

It reads partly, “The people and Government of Anambra State have received with joy, like the rest of Nigeria, the Supreme Court judgment upholding the decision of the Court of Appeal sitting in Kano that Chief Victor Oye is the authentic National Chairman of the All Progressives Grand Alliance.

“The Supreme Court has, once again, demonstrated that the Nigerian judiciary is a temple of justice. It does not just give judgments but also dispenses justice.

“There is massive rejoicing throughout Anambra State and, indeed, all over Nigeria at the Supreme Court judgment. The people feel justice has been done.”

‘No plan to impeach deputy gov’

Adinuba added that there was no plans to impeachment the deputy governor, Dr Nkem Okeke, who dumped APGA  for the All Progressives Congress.

The commissioner said, “Although Okeke’s defection is morally wrongly, the state governor, Willie Obiano, is not taking that seriously because Okeke has no electoral worth.”