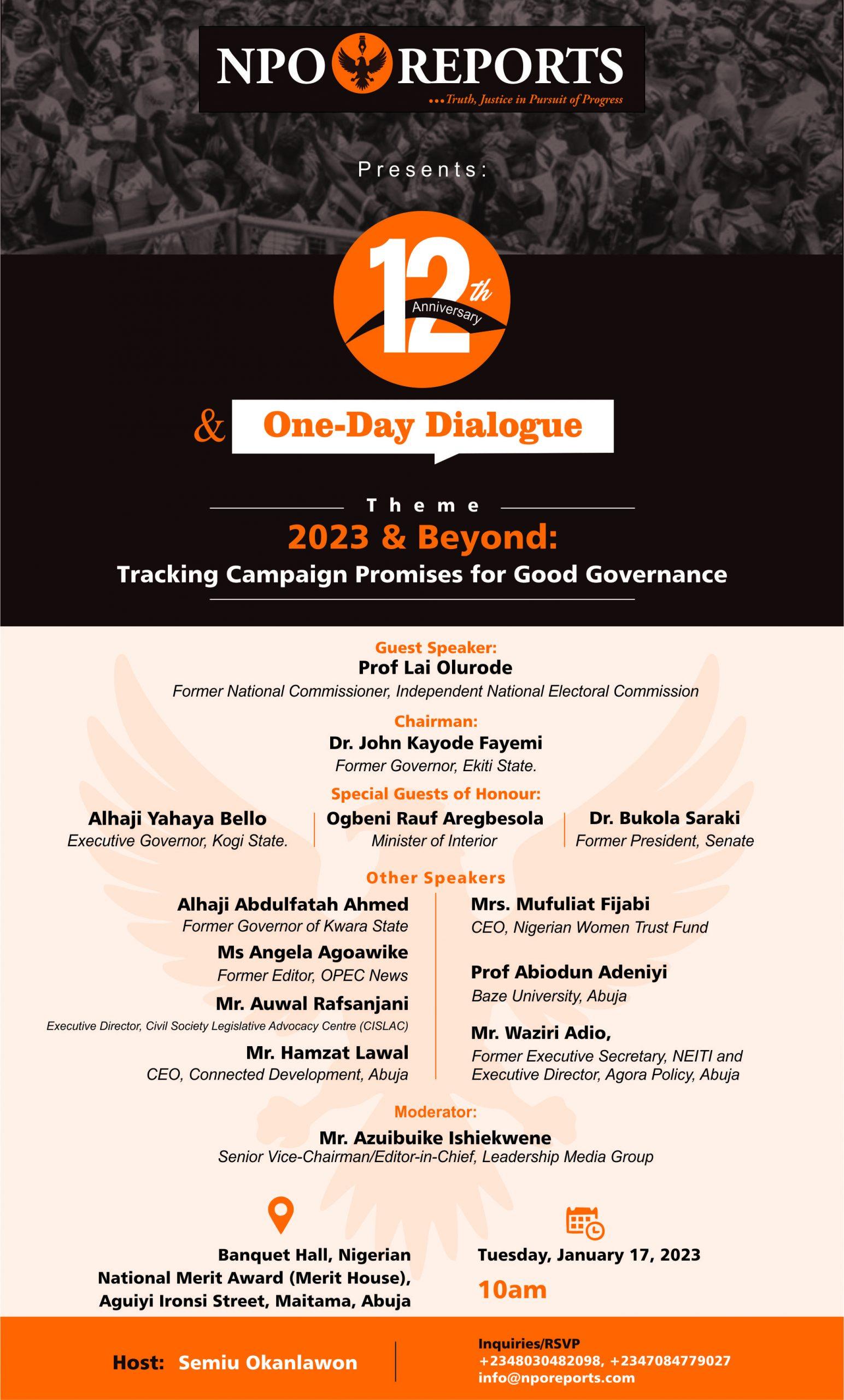 Politicians and prominent members of civil society organisations are billed to seek new ways to hold politicians accountable for the promises they make to the electorate during electioneering at a one-day dialogue.

Holding in the thick of campaign promises ahead of the 2023 general elections, others expected to speak at the one-day dialogue, which is also to mark the 12th year anniversary of the NPO Reports (formerly Nigeria Politics Online) are Prof Lai Olurode, a former National Commissioner of the Independent National Electoral Commission (INEC) and former Governor of Kwara State, Abdulfatah Ahmed, Chief Executive Officer of the National Women Trust Fund, Mrs. Mufuliat Fijabi.

The theme of the one-day dialogue – 2023 & Beyond: Tracking Campaign Promises for Good Governance – according to a statement signed by Semiu Okanlawon, Editor-in-Chief of NPO Reports, is to ensure political office seekers and the electorate begin to treat campaign promises as accountability issues for the sake of good governance.

The event will also feature a panel discussion which will be moderated by frontline columnist and the Vice President/Editor-in-Chief of Leadership Newspapers, Mr. Azubuike Ishiekwene.

Expected at the event are representatives of civil society organisations, especially those working for the fine-tuning of the Nigerian political space. Some of these include YIAGA Africa, Fix Politics, BudgIT, the Civil Society Legislative Advocacy Centre, the Nigerian Women Trust Fund, Corporate Accountability and Public Participation Africa (CAPPA) and the Socio-Economic Rights Accountability Project (SERAP).

According to Okanlawon, journalism has a huge role to play in turning campaign promises into accountability issues.

“Over the decades, not even the politicians who mount campaign boxes are conscious of the sanctity of the promises they make.

“Oftentimes, there are no records of those promises. Whereas, the electorate, often take electoral decisions on the strength of the promises made.

“Sadly, there are no mechanisms for tracking these promises and there is a dearth of tools to force them back to their promises in order to achieve redemption.” the statement noted

Why Women May Continue to Have Sex Late Into Pregnancy — Physician