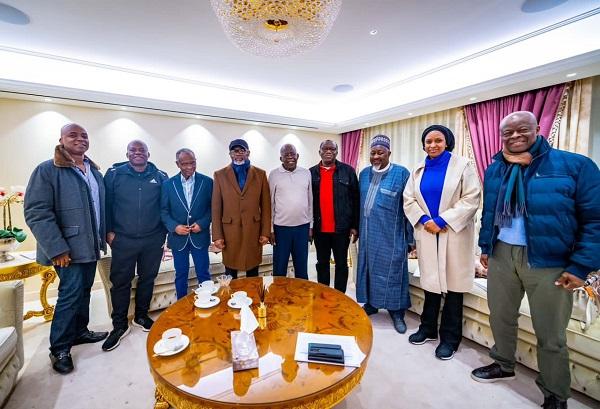 He will expound on his plans for security, economy and foreign policy at the United Kingdom’s elite foreign and policy think-tank institution.

In 2011, Tinubu spoke at Chatham House on the rebirth of the opposition in Nigerian politics.

The session was titled: “Democracy and the rebirth of the opposition in Nigeria.”

Today, he will shed light on how he will tackle security and halt the activities of terrorists, bandits and other criminals trying to hold the country to ransom.

In his manifesto, Tinubu has indicated an intention to establish a bold and assertive policy capable of creating a robust architecture to effectively tackle terrorism, banditry, kidnapping and other forms of criminal tendencies starring Nigeria in the face.

To him, the country should be able to manufacture goods and services required by citizens, instead of depending on imported goods, at the risk of capital flights.

Tinubu believes that the Naira can be strengthened when Nigeria exports more and imports less.

He also intends to make the country achieve double-digit economic growth by boosting the Gross Domestic Product (GDP) to over US$533 billion by the end of next year and tame inflation to a single digit.

Tinubu has acknowledged the dark side of petroleum subsidies.

He said if elected, his administration will remove subsidy.

Besides, he has planned to “re-energise the oil and gas sector by optimising the nation’s oil-production capacity, bringing to an end the incidence of theft, vandalism and corruption in the industry”.

To revive the manufacturing sub-sector, Tinubu plans to resolve the power question. Electricity, in his view, is critical to the stability of the informal sector and the revival of failed industries, which have the capacity to create jobs for youths through the resumption of optimal productive activities.

2023: INC intensifies call for the arrest of Sheikh Gumi