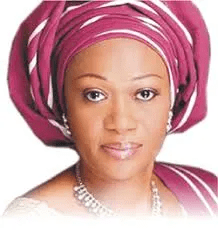 Senator Oluremi Tinubu, wife of the All Progressive Congress, APC, presidential candidate, Bola Ahmed, has admonished Nigerians to be as bold as the Sri Lankans to chase her husband out of Aso Rock if he fails to fulfill his electoral promises to reposition the country, after being elected President in the February 25 election.

Senator Oluremi Tinubu has embarked on a campaign spree in the Eastern part of the country enjoining the Igbos, men, and women, to trust in the APC’s Renewed Hope drive of the Tinubu/Shettima mantra. She was speaking at the South-East women’s rally for Tinubu/Shettima Presidential Campaign in Owerri, Imo State.

Oluremi noted that she is a Christain and urged Nigerians to give the APC Muslim-Muslim a chance.

“Let’s leave religion aside; I am a Christian. Have you ever thought that one day a Christian-Christian candidate would emerge? What would be the reference point?

“We have tried the Muslim-Christian ticket; let us try this one too, and after four years, if they don’t do well, you can drive them out,” she said.

Last year, the Sri Lankan protesters chase their President, Gotabaya Rajapaksa, and his family out of the government house forcing the 73-year-old to flee to the Maldives with his wife and two security officials before he announced his resignation.