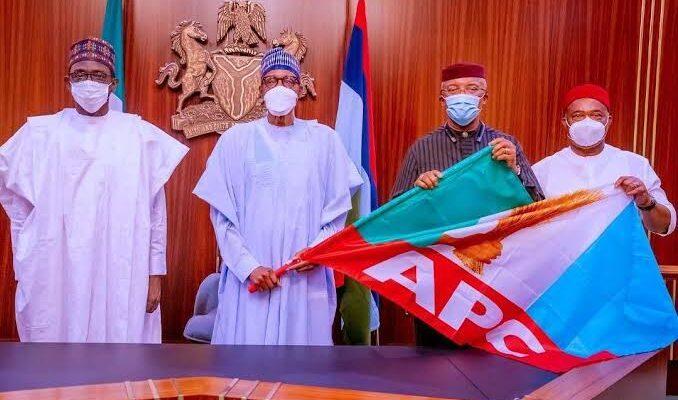 Until his defection, Okeke worked with Governor Willie Obiano.

Okeke was presented to President Muhammadu Buhari at the Presidential Villa, Abuja, by the APC caretaker chairman and Yobe State Governor, Mai Mala Buni, and Governor Hope Uzodinma of Imo State, on Wednesday.

Okeke dumped APGA less than a month to the gubernatorial election in the state.

“The Senator Andy Uba Governorship Campaign Organisation, SAUGCO has welcomed the Deputy Governor of Anambra State, Dr. Nkem Okeke into its fold. “We heartily welcome our deputy governor, Dr. Nkem Okeke, an intellectual of no mean standing who has over the years striven to steer the ship of Anambra state from the parochialism and maladministration which his Principal, Governor Willy Obiano has foisted on the state.

According to the statement, for several years, Dr. Okeke had remained the only sane voice of reason in Government House, Awka

He also alleged that Obiano elevated his wife to the status of co-Governor and relegated the deputy to nothingness.

“For taking this patriotic step, in the face of daunting personal discomfort, this generation of Ndi Anambra, and indeed Anambra children yet unborn, would remember the name, Dr. Nkem Okeke, as one who rejected the accouterments of high office and elected to align with the people.”he said .