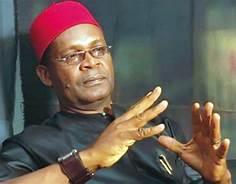 According to him, nobody is going to vote for people who would use the same position to divide Nigeria.

Igbokwe, who is an aide to Lagos State Governor, Babajide Sanwo-Olu, stated this in a PUNCH Live interview on Thursday.

He said the South-East geopolitical zone has indeed suffered “injustices”, adding that in “everything we share in this country, we get the least.”

He, therefore, urged the President, Major General Muhammadu Buhari (retd.) to facilitate the creation of one more state to make states in the South-East six like other geopolitical zones in Nigeria.

States currently in the zone are Anambra, Imo, Enugu, Abia and Ebonyi.

Speaking on the PUNCH Live programme, the politician, however, noted that despite the “injustices”, violent agitations and killings were not the way to press for justice, equity and fairness.

Igbokwe lambasted members of proscribed Indigenous People of Biafra and other secessionists in the South-East geopolitical zone, saying they are going about their agitation in a wrong manner.

He alleged that IPOB members are supporters of the Peoples Democratic Party, adding that the secessionists began agitations to leave the Nigerian entity after the PDP lost the 2015 presidential election.

The party stalwart said that only the PDP is currently campaigning in Anambra ahead of the November 6 governorship poll while other parties are allegedly being attacked.

He knocked Igbo leaders who are thirsty for the zone to produce a President in 2023, saying they should wake up and do the politicking and make friends in the other five geopolitical zones to achieve their goal.

As the 2023 general elections draw nearer, there have been intense political posturing, permutations, and fireworks, especially as the eight-year regime of Buhari, who is from Katsina State, winds down.

The 17 Southern Governors had also met twice in the year and demanded power shift to their region while the 19 Northern Governors also met last week, opposing such move and noting that the candidate with the highest votes will emerge as President in the next general elections.

Asked whether the agitation by IPOB and the other secessionists in the South-East would be laid to rest should the zone produce a President in 2023, Igbokew said it is not by force that the next Nigerian leader emerges from the zone.

He said Igbo politicians should do the work if they so desperately want the next Presidency, adding that Igbo people must drop Biafra agitation to be considered for serious national offices.

The 65-year-old Anambra indigene said, “If you want other Nigerians to vote for you, then you have to count how many bridges that you have built; bridges of understanding, bridges of communication, bridges of friendship.

“I want to see your bridges and you want them to vote for you? Nobody is going to vote for somebody who will use that position to divide Nigeria.

“You cannot be talking about secession and talking about producing the President of Nigeria. We need to settle the issue first; we need to say, ‘Look, we have given up this demand for Biafra, grant us justice’.

“Today, Asiwaju (Bola Tinubu) is in the saddle. How did Buhari become the President of Nigeria? It was Asiwaju that wooed him in 2013 with Tony Momoh, with Baba Akande and they went to Daura to meet Buhari.

“They went there to build a bridge and the rest is now history and that was how Buhari that had lost hope became the President of Nigeria.

“Somebody connected, somebody had sleepless nights, somebody trusted.

“Drop your arms first and enter planes or luxurious buses to South-West and pledge your loyalty to the Federal Republic of Nigeria, that, ‘Look, we have been able to settle issues in our home, we need to be President, we have not been President since after the civil war…

“Once you have settled that you have dropped this agitation, that you are part and parcel of Nigeria and we see it in your action and deeds, I am not talking about myself but other Nigerians because the issue now is trust – we (Easterners) cannot be trusted. Even with the happenings in the South-East, our leaders are playing politics with it.”

Igbokwe, who had claimed his house was burnt over the weekend by IPOB arsonists in Nnewi, further said he supports the planned imposition of a State of Emergency in Anambra, noting that Governor Willie Obiano has shown that he cannot handle what is playing out in the state.

“With this kind of fear, you can’t have election in Anambra…South-East is now a war zone, the police is helpless,” the APC member lamented, adding that a “State of Emergency is not out of place”.

The PUNCH had earlier reported that the Attorney-General of the Federation and Minister of Justice, Abubakar Malami (SAN), on Wednesday, said that the Federal Government might declare a State of Emergency in Anambra to ensure that the November 6 governorship election in the state takes place.

But after a meeting with the President on Thursday, Obiano said Malami was on his own, adding that Buhari was not in support of an emergency rule in the state.

According to Section 305 of the 1999 Constitution, a state of emergency is a situation of national danger or disaster in which a government suspends normal constitutional procedures in order to regain control.

A declared state of emergency allows the President to immediately make any desired regulations to secure public order and safety.

The insecurity in Anambra worsened a few weeks ago with a declaration by IPOB that the November 6 governorship poll in the state would not hold.