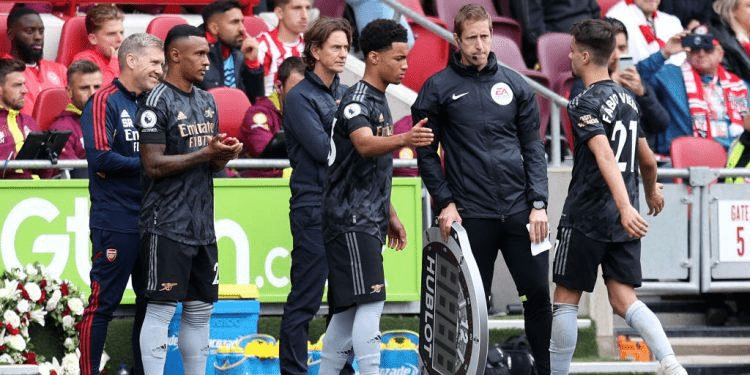 Arsenal manager, Mikel Arteta handed a debut to a 15-year-old player of Nigerian descent on Sunday, making the youngster the youngest ever player to feature in the Premier League

The Spanish coach said he saw the teenage star train with the first team and got good reviews from the academy coaches and Director of Football, Edu.

“It was a pure gut feeling. I met the boy (and) really liked what I saw. Per Mertesacker and the academy staff are giving me really good information, Edu as well,” he said.

“I met him, he’s trained a couple of times with us. Yesterday he had to come because we have injuries, especially the injury of Martin (Odegaard), and then I had that feeling from yesterday that if the opportunity could come that I was going to do it and I have just done it.”

The former Arsenal captain said he didn’t tell the player so many things but he just decided to try him on: “Those things it is better not to tell them. Just throw him there and see what happens.”

How well did Nwaneri perform on his debut?

The young midfielder was subbed on by Mikel Arteta for Fabio Vieira in the 92nd minute.

In his one minute of action, he was able to complete one pass but received applause from the fans after the game after Aaron Ramsdale urged him to applaud the travelling supporters.

From a football point of view, it was too little time on the pitch to assess the record maker.

How does Nigeria benefit?

Nwaneri’s father is Nigerian and that makes him eligible to represent various Nigerian national teams.

He is currently with the England U-16s and recently made his debut with the U-17s. With a Premier League berth under his belt, he’s expected to soon be called up to the England U-21s as he joins a growing list of English-born Nigeria-eligible players.

How did Nigerians and the world react to Nwaneri debut?

Nwaneri’s debut was met with surprise and excitement in Nigeria. He was credited for his achievement and encouraged him to go for more.