Then PSG midfielder Jay-Jay Okocha controls the ball during a French first division match at Parc des princes stadium in Paris, in 2000

And former Germany international Ozil, who has been on the fringes at Arsenal this term, says the dazzling Okocha was also his idol growing up.

“What name and number were written behind the fb shirt you wore when you were younger?”, a fan had asked Ozil on social media platform Twitter.

“Number 10 and Jay Jay Okocha,” the talented midfielder had responded.

Born in Enugu, Southeast Nigeria, Okocha, 47, laced his boots for Ozil’s boyhood club Fenerbahce in Turkey, Eintracht Frankfurt in Germany, Paris Saint-Germain in France and Bolton in England, among others.

In his two seasons at Fenerbahce, Okocha amassed 30 goals in 62 appearances, many of them from direct free kicks, a trademark for him at the club. 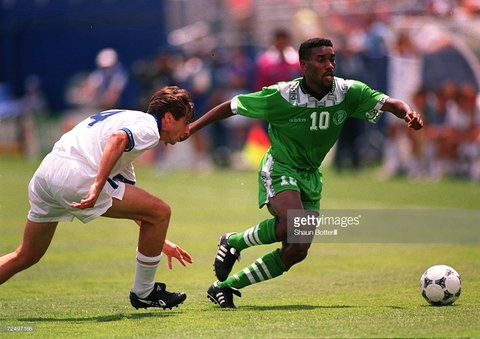 He was also part of the ‘Dream Team’ that won gold for Nigeria’s soccer team at the Olympic games in Atlanta, USA in 1996.

Black Lives Matter: How About Your Skin?