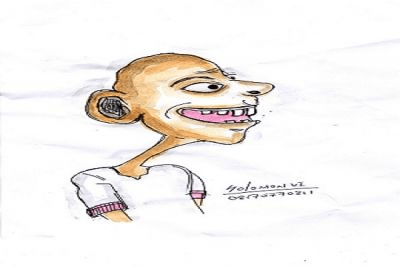 As we were crawling into bed, the full investiture of Okon Anthony Okon as the Babajiro of Yanmuyanmu took place at a colourful ceremony at Orile Yanmu on the ancient route to the old capital of Oyo Empire. Dressed in traditional regalia and adorned with the ancient Akoko  leaf, the impossible Calabar boy was quite a sight to behold. An elated and tipsy Okon took a look at snooper and yelled: “Oga, se you know say I don become your oga now?”

An embarrassed and crestfallen snooper quickly disappeared into the crowd before the mad boy could compel his master to pay him traditional homage. God forbid this desecration and abomination. Rather than prostrating for Okon, snooper would be willing to join his ancestors. If this was what things have turned into, the country has truly gone to the dogs.

As snooper was ruminating in humiliation, Okon suddenly mounted the rostrum to give his acceptance speech. After thanking his childhood crony, the Oniyanmu for the honour, Okon suddenly launched into a tirade against leading traditional rulers in the country for selling their souls for a mess of pottage.  Their palaces, the mad boy thundered, will be converted to museums of atrocity for future generations to behold.

By this time, the inevitable Baba Lekki had miraculously surfaced by Okon’s side, heckling the hecklers and cheering Okon on in his social abomination. He was impressive in his native Kembe and traditional Abetiaja cap. As the stale palm wine and prohibited weeds ransacked his brains, he became more and more offensive and abusive of authority. The crazy old man began singing in drunken revelry.

I wonna, I wonpapa  I wonna

I wonna I wonpapa I wonna

At this point, two reporters from a local newspaper approached the old man.

“How do you see today’s investiture sir?” they asked him.

“I don’t see nothing. This is bourgeois jiggery-pokery laced with feudal phantasmagoria”, the old man shot back in perfect English.

“What?” the two chaps exclaimed almost at the same time. Thinking that they had a perfect copy, they quickly turned the argument into politics.

“The senate has announced a ten percent cut in salary”, one of them noted warily.

“I see. What is their cut? “ the old man shot back again.

“No, no no. It doesn’t work like that. Mr Reporter, you are a fool. The question is how much cut the crooks took before agreeing to a cut in salary. They must put all the figures on the table, otherwise they are just using Abu’s money to entertain Abu”, the old man snarled with much vitriol as he began to crawl away. “By the way, I don’t want to see myself in your bourgeois rag sheet, you hear?” he screamed at the boys.

‘LASU: Before politics destroys its brand, by Martin’s Oloja

Ebubeagu, Amotekun And The Confusion Of Meaning, By Azuka Onwuka

Of drones, grazing and ‘Abishola’