You know all about Thor, the Norse god of thunder but do you know about Sango and Amadioha. Let’s find out their differences and similarities. 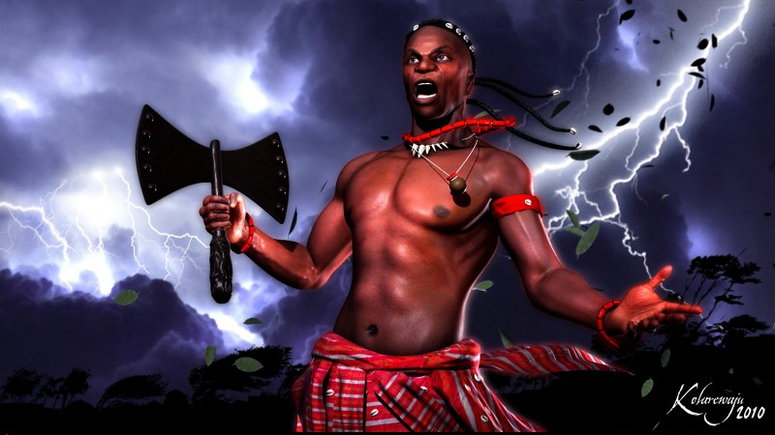 Before we even heard about the Norse god of thunder, Thor, we had ours. It is very common to hear the slang, “thunder fire you” but do you know where it originated from?

In African folklore, Amadioha and Sango are gods of thunder to the Igbos and Yorubas respectively. There are many difference between them but many similarities too. They are both associated with aggression and serve as agents of justice.

People who have been accused of crimes go to their shrines to declare their innocence, less they be struck by lightning. Their common colour representation is Red and white, and the white ram. The ram is sacred to a lot of the African thunder and lightning gods, both as a sacrifice and as a symbol.

Sango is one of the ancestral fathers and Orishas of the Yoruba, Caribbean and certain Latin American people. He is the highly reverenced god of Thunder, Lightning, and Electricity who was also the third Alaafin of Oyo. He was a powerful ruler who brought prosperity to his land. He gained his powers from a babalawo (herbalist) when he sought more power to destroy his enemies. He gained the powers to control lightning and was subsequently possessed by the spirit of lightning marking his ascendance into Orisha level. He was also said to breathe fire and apparently never died.

Due to slave trade, Sango is also venerated in Haiti, as a god of thunder and weather; in Brazil, he is known as Xangô; in Umbanda, as the very powerful loa Nago Shango; in Trinidad as Shango god of Thunder, drumming and dance ; and in Cuba, Puerto Rico and Venezuela – the Santeria equivalent of St. Barbara, he is known as Changó.

His symbol is a double-headed axe, which represents swift and balanced justice. He is the owner of Bata (double-headed drums), as well as the Arts of Music, Dance and Entertainment in the Yoruba Culture.

Amadioha is the god/arusi (deities)of thunder and lightning of the Igbo people of south eastern Nigeria. He is first and foremost known as a god of justice. He speaks through thunder, and he strikes with lightning.In some parts of Igboland, he is referred to as Amadiora, Kamalu (which is short for Kalu Akanu),Kamanu, or Ofufe. He is revered in the same way a god is, lovingly and fearfully. Metaphysically, Amadioha represents the collective will of the people. He is also considered the creator God and the god of love, peace and unity. His name is used as oaths in Igboland and carry death penalties when broken. It is common to hear someone say, “Chi m le kwee – O wuru si o wu mu mere ihea, amadioha magbukwe m” (My god please see- If it is true that I did this thing, let Amadioha Kill me).

He never manifested as a human. Unlike his fellow thunder and lightning deities, Amadioha doesn’t carry an object of power like Thor carries his hammer or like Shango carries his axe. His symbol is a white ram. From witness reports, Amadioha at times appears to people in the form of a large white ram.

Astrologically, his governing planet is the sun and he is often associated with Anyanwu, who is the Igbo god of the Sun.

The Timeline of Currency in Nigeria

5 Reasons Why You Should Consider Having a Court Wedding

NIN: How Nigerians in Diaspora can Register – Abike Dabiri